An international comparison of labour productivity across the G7 nations, in terms of levels of and growth in GDP per hour and GDP per worker.

Output is measured by gross domestic product (GDP). Labour input is measured in two ways – by total hours worked and by the number of workers in employment. These two measures of labour input can yield different results, reflecting differences in working patterns across countries and compositional movements over time, such as a shift towards part-time working.

Comparability across countries is achieved by using estimates of GDP and labour inputs from a common source (the Statistics Directorate of the Organisation for Economic Co-operation and Development (OECD)) as far as possible. These were the best data available at the time of publication. We convert local currency-based measures of GDP using Purchasing Power Parity (PPP) exchange rates, which attempt to equalise the cost of a representative basket of goods and services in countries with different national currencies. An article by the Office for National Statistics (ONS) explaining the uses and limitations of PPPs is available on our website. For data points where labour input is not available from the OECD Annual Labour Force Statistics (ALFS) database, Eurostat (for European countries) and an alternative OECD employment series (for non-European countries) are used to project the missing data.

The estimates in this release update those published on 6 October 2016. This release cycle reflects the publication and revision cycles of the component data series.

Alongside this release, estimates for a series of additional countries are also published in the datasets. Commentary on these additional estimates is included in the Productivity introduction. While the methodology underlying these is consistent with the G7 estimates, they are not National Statistics.

More information on methodology and interpretation is available in the quality and methodology section of this bulletin. 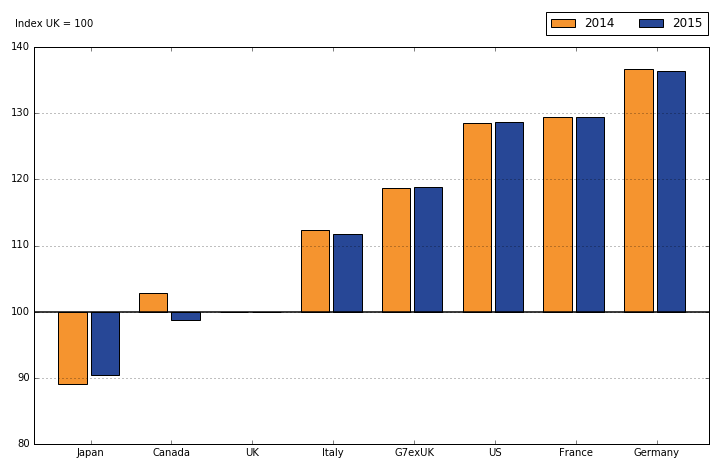 As shown in Figure 1, the ranking of nations by their productivity changed little between 2014 and 2015. The UK’s productivity gap with the rest of the G7 increased slightly from 15.8% in 2014 to 15.9% in 2015; while the gaps between the UK and the US, Germany and France remained substantial. In 2014, Canada had stronger productivity than the UK on a gross domestic product (GDP) per hour worked basis; however, in 2015 the UK was more productive than Canada. Canada's current price productivity growth was slower than that of the UK because while both countries experienced growth in hours worked, the UK's current price GDP growth was stronger than that of Canada. The UK remained more productive than Japan in 2015 although the gap between the two narrowed a little.

Final estimates for 2015 show that UK output per worker was: 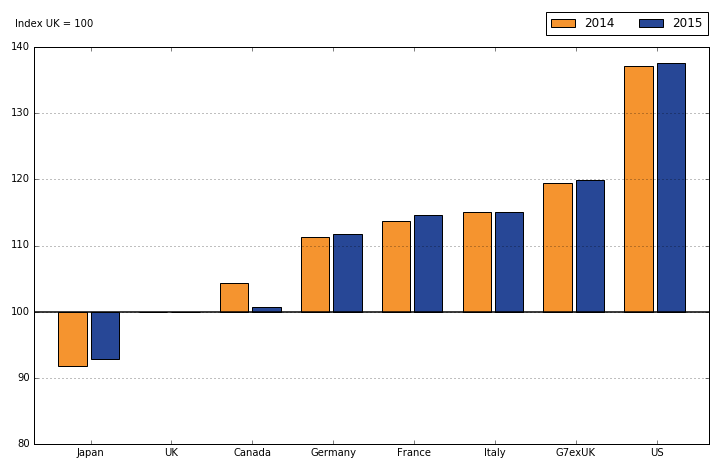 The projections used in Figure 3 commence from 2008, however, when reviewing the performance of the rest of the G7, it can be argued that the slowdown in productivity growth began in 2005, preceding the economic downturn. Projecting from 2005 would result in a larger gap for the G7 excluding the UK, than that shown in Figure 3.

Figure 4 illustrates the difference in productivity trajectories over recent years between the G7 economies. Output per hour fell in most G7 countries during the downturn in 2008 and 2009, before rebounding sharply in Canada and the US. However, a slowdown in growth can be observed in several countries before this, with German growth slowing from 2004, while Italy demonstrated no substantive growth since 2000. Comparing average productivity growth rates since 2007, the UK ranks second bottom; only Italy had lower productivity growth. Though Italy’s productivity growth has been lower than the UK post-downturn, its pre-downturn trend was relatively subdued and as such their slowdown relative to trend is less marked than the UK’s, highlighting that the choice of time period is fundamental to these calculations.

Historical data used in this publication are subject to revision between publications. Datasets R1 and R2 compare the latest estimates with estimates from the previous release on 6 October 2016. Note that because Tables 1 and 2 are indexed to UK equals 100, revisions to the UK are zero by definition in Tables R1 and R2.

The main revision in this release comes from substantial revisions to UK Purchasing Power Parities (PPPs) for the period 1995 to 2009. Post-2010 PPPs had already been revised in the data used in previous releases, as they were part of the open window for PPP revisions.

The largest impact on the UK’s PPPs came from the improvements made to the measurement of imputed rental prices in the period prior to 2010. These are the housing services that accrue to households that own a property and reside in it: therefore avoiding the cost of renting an equivalent property, for which a change of source data was made in Blue Book 2016.

These revisions partly undo upward revisions that were applied previously when UK current price gross domestic product (GDP) adjustments were made following changes in the UK National Accounts at a point when compensating PPP changes had not yet been calculated. Since the rest of the G7 is indexed to UK equals 100 in the current price series, the downward revisions to UK current price GDP at PPP results in substantial improvements in other countries’ productivity relative to the UK. There have also been revisions, though on a smaller scale, to the PPPs for the majority of the series for Canada, France, Germany and Italy, as well as for the past 3 years for Japan.

Other revisions are as follows:

5 April 2017: UK productivity introduction: Oct to Dec 2016 draws together the headlines of the productivity releases into a single release, providing additional analysis of our productivity statistics.

International comparisons of productivity is published in levels and growth rates for the G7 countries. More international data on productivity are available from the Organisation for Economic Co-operation and Development (OECD), Eurostat and the Conference Board.

The OECD publishes its own estimates of current and constant price GDP per hour worked for member countries, the G7 and two other aggregates: the EU and OECD. The OECD current price estimates can easily be indexed to UK equals 100 and can then be compared with the estimates in Dataset table 1. While there are some differences between the two sets of estimates, the overall picture is very similar.

The OECD constant price estimates use a different base period to the estimates in Dataset table 3 and are best compared in terms of growth rates. Again, while the two sets of growth rates are not identical, the overall picture is very similar.

Differences between the estimates in this release and the OECD productivity series can be explained by the different sources used for the component data. In particular, our estimates use employment data that are based on countries’ labour force surveys, whereas the OECD estimates use the national accounts as the main source of employment data for most countries. There can also be differences in the GDP data due to timing, as the OECD productivity estimates use annual national accounts whereas we use the Quarterly National Accounts for GDP data.

International estimates of productivity are also available from Eurostat and the Conference Board.

For this release the base year for Purchasing Power Parities (PPPs) is 2014, which is the latest year for which the Organisation for Economic Co-operation and Development (OECD) PPP series have been benchmarked.

The output measure used here (gross domestic product (GDP)) differs from that used for the ONS headline measure of productivity (gross value added (GVA)). In the national accounts, GDP is valued at market prices and GVA is valued at basic prices. The principal difference is that basic prices exclude taxes and subsidies on products, such as VAT and excise duties. For further information on the relationship between GVA and GDP see Chapter 4 of the ONS Productivity Handbook.

GVA is the preferred measure of output for productivity purposes. However, as the OECD does not produce output level series using basic prices over the necessary time period and PPPs are based on market prices, GDP is used in this bulletin. Differences between the growth rates of GVA and GDP are not normally significant.

Estimates of labour inputs (employment and hours worked) are taken from OECD where available, supplemented in a small number of cases by other sources. Differences between OECD estimates and national sources reflect adjustments made by OECD to achieve greater consistency between national estimates. There may also be timing differences as national sources are updated outside the OECD revision cycle.

Current price productivity estimates are indexed to UK equals 100 for each year and show each country’s productivity relative to that of the UK in that year. Since productivity is an important determinant of living standards, these estimates also provide an indication of living standards relative to the UK. In interpreting these estimates you should bear in mind that PPPs provide only an approximate conversion from national currencies and may not fully reflect national differences in the composition of a representative basket of goods and services. Additionally, care should be taken in interpreting movements in current price productivity estimates over time. For example, an increase in UK productivity relative to another country could be due to UK productivity growing faster, or falling less, or due to changes in relative prices in the two countries, or some combination of these movements.