Predicted changes in the size and age structure of the UK population based on a set of assumptions about future fertility, mortality and migration, including a number of variant projections based on alternative scenarios.

This bulletin presents the key findings from the 2012-based national population projections. These are based on the estimated population at 30 June 2012, and include results from the 2011 Census. They replace the 2010-based projections published by ONS in October 2011. The national projections are produced by the Office for National Statistics on behalf of the National Statistician and the Registrars General of Scotland and Northern Ireland.

National population projections by age and sex are produced for the UK and its constituent countries every two years. The projections are based on the most recently available mid-year population estimates and a set of underlying demographic assumptions regarding future fertility, mortality and migration. They are not forecasts and do not attempt to predict the impact that future government policies, changing economic circumstances or other factors might have on demographic behaviour, for example, government policies on immigration or student fees.

Projections become increasingly uncertain the further they are carried forward into the future, due to the inherent unpredictability of demographic behaviour. To give users an indication of this, a number of variant projections are also available which provide other future scenarios based on alternative assumptions of future fertility, mortality and migration. They do not represent upper or lower bounds, but do illustrate what the population could look like if, for example, fertility was to become lower than assumed for the principal projection, which is the main or central projection.

This bulletin focuses on the first 25 years of the projections. Longer term projections to mid-2112 are also available on the ONS website for users who require them, but these should be treated with caution. Longer term projections are not considered appropriate for a wide range of uses, particularly when broken down by age, but have been made available in line with making datasets publicly available under the government’s transparency agenda. For more information on how ONS population projections meet user needs along with information on their fitness for purpose, please see the report on quality and methodology (109.5 Kb Pdf) .

Table 1: Estimated and projected population of the United Kingdom and constituent countries, mid-2012 to mid-2037

Download this table Table 1: Estimated and projected population of the United Kingdom and constituent countries, mid-2012 to mid-2037

Now looking at the projected population at mid-2037, we can see that: 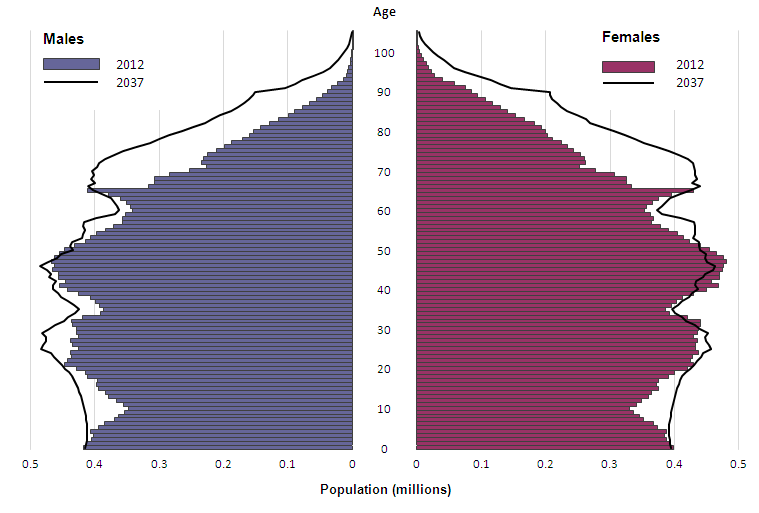 Figure 3: Estimated and projected population aged 70 and over, United Kingdom, mid-2012 and mid-2037

Download this chart Figure 3: Estimated and projected population aged 70 and over, United Kingdom, mid-2012 and mid-2037

Over the same period, the number of people of working age is projected to rise by 12 per cent from 39.4 million in mid-2012 to 44.2 million by mid-2037. The definition of working age used in this bulletin is people aged between 16 and state pension age. In mid-2012, there were 0.3 million more people of state pension age than children aged under 16; by mid-2037 this difference is projected to exceed 3.1 million.

All the variant projections result in an increasing population between mid-2012 and mid-2037 however the rate of increase varies between them. Details of the principal and variant assumptions are outlined later in this bulletin and are summarised in Figure 4.

Figure 4: Estimated and projected population of the United Kingdom, mid-2001 to mid-2037 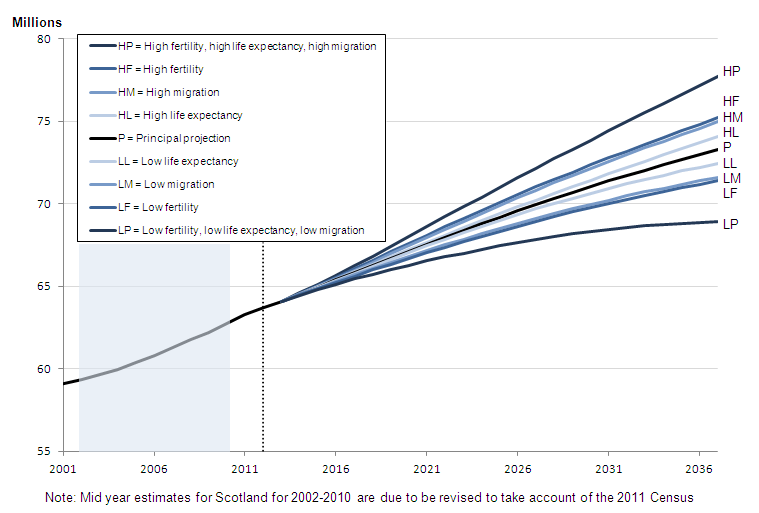 Download this image Figure 4: Estimated and projected population of the United Kingdom, mid-2001 to mid-2037

The long-term assumption of completed family size for the UK for the principal projection is higher than the 2010-based projections at 1.89 children per woman. The corresponding assumptions for all four constituent countries have also increased by the same amount. This increase is based on the observation that the falling completed family size for women has slowed in recent years, and younger cohorts partway through their childbearing years look set to have similar levels of completed fertility to those who have recently completed childbearing. These projections assume that the total fertility rate for the UK decreases slightly from mid-2012 to mid-2013 then stabilises at 1.89 from then on. These assumptions are different from those used in the 2010-based projections that started from a higher base, assumed higher levels of fertility in the short term and then assumed lower levels in the longer term.

These rates of improvement are best illustrated using the projected period life expectancies at birth. For mid-2037 these are around 0.1 years higher than in the previous projections for females and 0.4 to 0.8 years higher for males.

These changes reflect the most recent trends in both international migration and cross-border migration between the four countries of the UK. New methods have been used to model migration trends in setting the migration assumptions for the 2012-based projections.

Since the 2010-based projections were published the results of the 2011 Census have been released and used to rebase the population estimates series. There were around 500,000 more people estimated by the 2011 United Kingdom Census than had been previously estimated. At mid-2012 the estimated population of the UK was about 460,000 higher than that projected for mid-2012 in the 2010-based projections.

These changed assumptions result in there being projected over the decade to mid-2022:

Table 6: Comparison of 2012-based and 2010-based principal projections, United Kingdom

Download this table Table 6: Comparison of 2012-based and 2010-based principal projections, United Kingdom

The latest Eurostat projections are still EUROPOP10. A discussion about these was included with the 2010-based projections.

Produced in partnership with

The Northern Ireland Statistics and Research Agency (NISRA), the Statistical Directorate of the Welsh Government and National Records of Scotland (NRS).