This note summarises some of the main themes to help users understand that the differences between the various sources are driven by differences in definitions and coverage. It highlights that each source is valuable in its own right in measuring particular aspects of international migration.

The main points to note are:

Long-Term International Migration (LTIM) estimates are based on data from the International Passenger Survey (IPS), with adjustments made for asylum seekers, non-asylum enforced removals, people resettled in the UK under resettlement schemes, visitor and migrant switchers and flows to and from Northern Ireland.

The IPS is a sample survey that collects information from passengers as they enter or leave the UK. International migration statistics from LTIM and directly from the IPS refer to flows: the movement of people in to and out of the UK during a specific period of time. A long-term migrant is defined as someone who changes their country of usual residence for a period of at least 1 year and is based on the UN recommended definition of a long-term international migrant. For more information about the use of the IPS for migration statistics, please refer to IPS Quality Information in Relation to Migration Flows.

Short-Term International Migration (STIM) estimates are also derived from the International Passenger Survey (IPS) and refer to flows. STIM estimates for England and Wales are available on the basis of 3 definitions:

Adding together LTIM and STIM estimates does not provide a reliable measure of all immigration to the UK within a specific time period. Short-term immigration flows are based on journeys, not people, and have methodological differences from LTIM flows, which are explained fully in the statistical bulletin. In addition, it is possible for someone to be both a long-term and short-term migrant in the same period and STIM estimates are based on actual flows whereas LTIM covers migrants' intentions.

However, although they cannot be added together to provide one single, accurate measure of international migration, LTIM and STIM estimates of immigration and emigration should be considered alongside and in the context of each other. These estimates represent different people immigrating for different reasons but they can help to provide an overall picture of international migration.

The Annual Population Survey (APS) estimates of population by country of birth and nationality refer to the resident household population (or “stock”) living in the UK at a particular point in time. The APS uses data from two waves from the main Labour Force Survey (LFS) with additional data collected via a local sample boost and so the following observations about the APS equally apply to the LFS.

However, although both sources (IPS and APS) have value, they are not directly comparable in this way as they have fundamental coverage and sampling differences. They are designed to measure different things, in different ways, based on different types of data and neither has complete coverage. One important example of these differences is that the APS is a survey of residential addresses and does not include most communal establishments. Changes in APS figures between two points in time show the net effect of all population changes (for example, births of non-UK nationals) rather than a flow and are subject to relatively large levels of uncertainty. 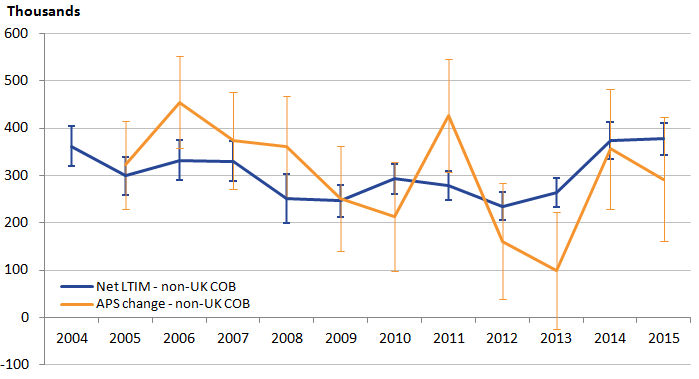 National Insurance numbers (NINos) are required in order to work or claim benefits in the UK; this means their coverage includes long-term migrants and short-term migrants. In May 2016, a report was published on the difference between NINo registrations and Long-Term International Migration (LTIM) estimates, which concluded that short-term migration to the UK largely accounts for differences between LTIM estimates and NINo registrations.

NINo registrations data are not a good measure of LTIM, but do provide a valuable source of information to highlight emerging changes in patterns of migration. The note confirmed that the International Passenger Survey (IPS) continues to be the best source of information for measuring LTIM. Figure 2 is taken from this note and illustrates the impact of these contrasting definitions.

Nationality information on individuals, who are subject to immigration controls, coming from non-EU countries, is provided by visa data published by the Home Office. There are a range of potential reasons why the long-term immigration estimates from the International Passenger Survey (IPS) may differ from figures for visas granted, including:

Figure 3 compares LTIM estimates for non-EU citizens with the number of entry clearance visas granted (excluding visitor and transit visas). The gap between the two series is explained by the reasons in this section. However, they do show similar patterns reflecting that they are both measuring flows and similar concepts.

Higher Education Statistics Agency (HESA) data collects information on the number of international students in Higher Education establishments in the UK. Data are supplied to HESA by institutions and include students enrolled on both undergraduate and post-graduate courses. There are a number of differences between student data available from HESA and student data available from the International Passenger Survey (IPS) and from visa data, including:

HESA data are particularly useful when estimating the distribution of student migrants by local authorities within the UK, since the IPS and visa data are not suitable for this purpose.

We have also carried out analysis using the various data sources in the previous sections looking specifically at the main reason for international migration. This includes reports on international student migration and family immigration.

This report further looks at what students do at the end of their studies as the International Passenger Survey (IPS) shows a difference between the numbers of immigrants arriving to study and the numbers of emigrants who had previously immigrated to study. The report outlines possible reasons for the difference:

To further understand the data sources measuring international student migration and their behaviour we have published several update articles as we have developed our understanding:

As we develop our understanding on international student migration we will provide further updates.

The Note on the different data sources that measure family immigration examines some of the available data sources for measuring different aspects of family-related international immigration. Home Office entry clearance visas (ECVs) and admissions; and the ONS International Passenger Survey (IPS) (restricted to non-EU nationals for comparison) are studied. Trends over time are generally similar, indicating that these are likely to reflect the true trends in family immigration. There are, however, large absolute differences in estimates of family immigration due to the differing coverage and methodologies of the sources. The note explores the definitional and coverage differences of each data source and provides users with advice on the most appropriate data source to meet their needs.

There is now much more interest in the characteristics of migrants who reside in the UK and the impact they have on the economy and society. There are sources of data that shed some light on this but these only go so far in meeting the needs of the public, media and policymakers. We are collaborating and data sharing across government to improve the information that is currently available to understand migration as described in our future work programme – International migration data and analysis: improving the evidence. 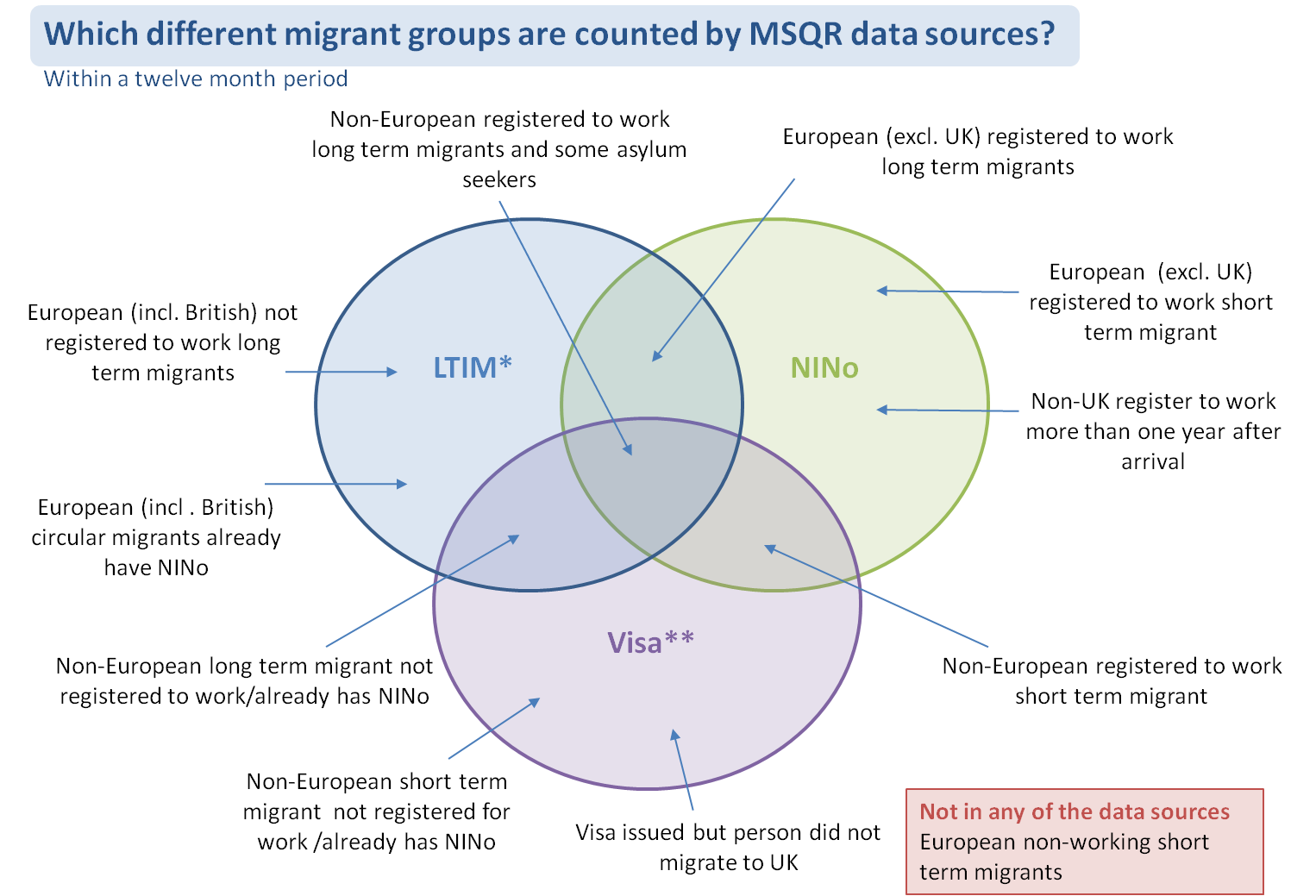