Estimates of people employed in the public and private sectors in the UK.

For this month’s release, revisions have been made to the public sector employment estimates back to the start of the quarterly time series in 1999. The main revisions are:

These statistics are used mainly to monitor changes in the number of people employed in the UK public and private sectors and to inform policy-making across government.

Estimates of PSE are presented by sector classification, industry and region. Civil Service employment is shown by government department and agency. Employment in executive non-departmental public bodies (NDPBs) is aggregated by sponsoring department.

While this bulletin focuses on headcount estimates of PSE, full-time equivalent estimates (based on the number of hours worked divided by the standard full-time hours) are available in the accompanying PSE datasets.

The PSE estimates are point-in-time employment estimates and relate to a specific day in the published month.

The main source of PSE is the Quarterly Public Sector Employment Survey, which aims to obtain complete coverage of local authorities and the Civil Service, and coverage of all public bodies with 20 or more employees. It is difficult to achieve complete coverage for local and central government, for example, in the education sector. Further information can be found in the Quality and Methodology Information report.

All time series in this release, except for the regional series, are seasonally adjusted to aid interpretation. Relationships that hold in the unadjusted series do not necessarily hold for the seasonally adjusted series. For example, total PSE equals the total of all public sector industry estimates before seasonal adjustment, but this is not necessarily true after seasonal adjustment.

Consistent with the revisions policy for public sector employment statistics , the statistics are subject to revisions. Revisions can be made for a variety of reasons, the most common include: 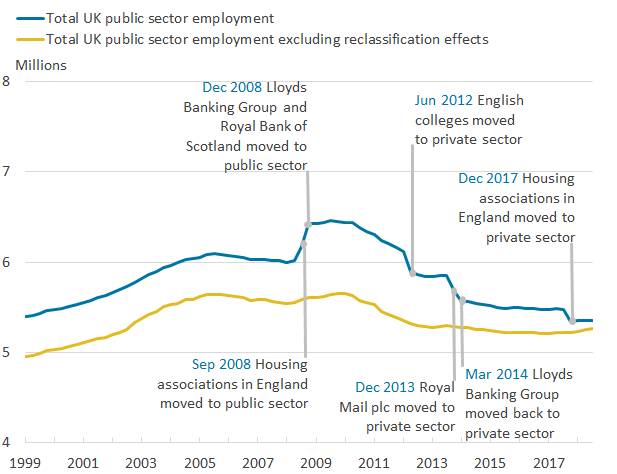 The composition of the public sector is changing due to academy conversions in England. Employees move from local government to central government when local authority schools become academies. In September 2018, academy conversions accounted for 18,000 employees over the quarter and 58,000 over the year, as shown in Table 1. A full time series of employment in academies is available in Table 11 of the public sector employment dataset.

For September 2018, there were 1.66 million people employed in the National Health Service. This was:

For September 2018, there were 1.03 million people employed in public administration. This was:

Figure 3 shows public sector employment by selected industries since the series began in 1999.

The estimates for September 2018 show that there were 27.12 million people employed in the private sector. This was:

As shown in Figure 5, the Home Civil Service has seen a steady increase in employment since the record low of 416,000 recorded for June, September and December 2016.

Estimates of public sector employment (PSE) in Scotland are published quarterly by the Scottish Government on the same day as the UK PSE release.

The primary source of the PSE statistics is the Quarterly Public Sector Employment Survey (QPSES), which comprises three separate data collections: local authorities in England and Wales, public corporations and non- departmental public bodies (NDPBs) in Great Britain and the Home Civil Service. Our targets for response before the results are compiled are 90% for Local Authorities and Public Bodies QPSES and 100% for Civil Service QPSES. Response rates for the latest period are shown in Table 3.

So that estimates of total public sector employment can be made, it is necessary for further information to be gathered from external sources, listed in Table 4.