The number of people in employment in the UK continued to grow in the 3 months ending December 2016, but the increase is smaller than the recent past.

The unemployment rate remains at its lowest in more than a decade.

The number of vacancies has remained steady since early 2015, suggesting stable labour demand.

Wage growth increased in the year to December but, after adjusting for inflation, the pace of real earnings growth weakens.

The UK labour market statistical bulletin includes a breakdown of employment by country of birth and by nationality, and relates to persons resident in private households. This is distinct from data on migration flows. The first migration figures that include a post-referendum period will be published on 23 February, when the Office for National Statistics will release migration statistics for the year ending September 2016.

The number of people in work increased by 37,000 in the 3 months to December 2016 to 31.84 million, with an increase in full-time employment (positive 45,000) partly offset by a fall in part-time employment (negative 7,000). Following 6 consecutive quarters of growth, the employment rate reached a new record high of 74.6%. However, the pace of employment growth in the second half of 2016 has moderated from the average rate experienced over 2012 to 2015 (Figure 1).

Other measures of labour market activity remained relatively stable in the 3 months ending December 2016. Average weekly hours worked were 32.1, unchanged from the 3 months ending September 2016. Similarly, the number of vacancies has remained steady since early 2015 after rising strongly over 2012 to 2014. The gross flow from employment to unemployment is the lowest on record, while the ratio of redundancies to employment remains at a low level. Job-to-job flows – an indicator of labour market confidence – declined slightly in the 3 months to December 2016 but is now around its pre-crisis average.

Figure 2: Unemployment as a per cent of economically active, by duration 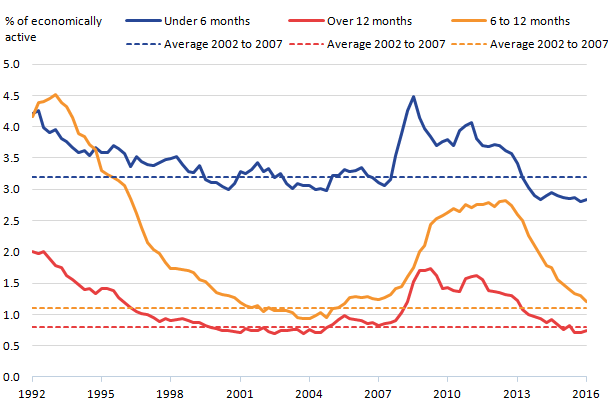 Download this image Figure 2: Unemployment as a per cent of economically active, by duration

Some measures raise questions about structural changes in the UK labour market. In particular, the proportion of part-time workers who cannot find full-time work is markedly above the long-run average. Combined with the increased share of part-time workers in the economy, this suggests that there may be resources in the labour market that firms can mobilise to increase output. Similarly, the underemployment rate – which captures employees who are available and would like to work more hours – at 8.1%, remains above its pre-crisis average of 6.7%. 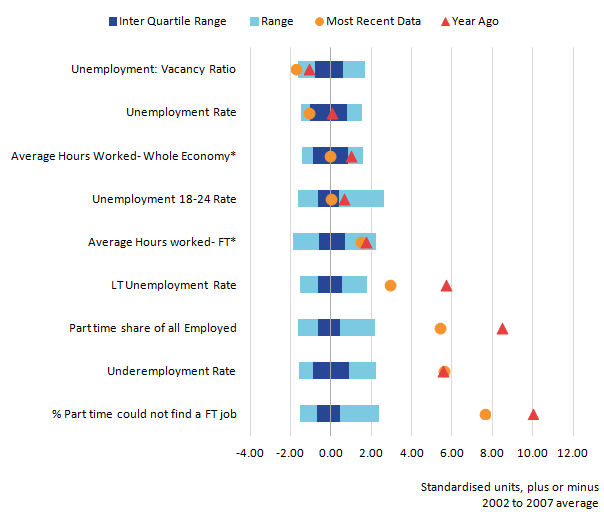 Notes for: The labour market edges towards full capacity

Average weekly earnings for employees increased by 2.6%, both including and excluding bonuses, compared with a year earlier. The rate excluding bonuses is the highest since the 3 months to June 2015 but well below the pre-crisis average of 3.8% experienced between 2002 and 2007 (see Figure 4).

However, taking into account the recent pick-up in the pace of consumer price inflation, real average weekly earnings increased by 1.4%, both including and excluding bonuses, over the year, the weakest pace of growth since the 3 months to December 2014. 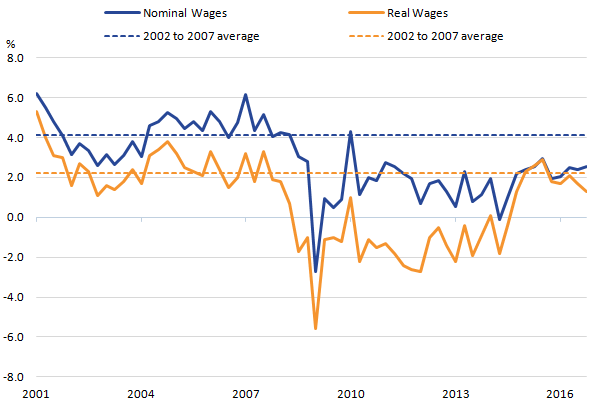