A preliminary indication of the age and sex structure of the UK population for mid-year 2020, and a range of scenario-based values for end of year 2020.

View all data used in this Erthygl
!

The Office for National Statistics (ONS) publishes official population estimates for the UK annually. These are based on the previous census and rolled forward each year to take account of the numbers of births, deaths, and migration. Since early 2020, the coronavirus (COVID-19) pandemic has generated unprecedented interest in population change across the UK. The impact of the pandemic on how we measure the UK population is outlined in a recent blog post by Jonathan Athow.

We recognise that since our last set of mid-year population estimates there is likely to have been a continuation of some aspects of population change seen before the pandemic, and new changes since the start of the pandemic, which may not yet be represented in some of our regular statistics. For example, our most recent 2018-based national population projections were published before the pandemic so use of these to understand the population in the early years of the projections series is difficult because these are long-term projections that were made prior to the coronavirus pandemic. As discussed in our January 2021 blog, we recognise that there is great interest in employment, migration and the population in 2020.

Census 2021 for England, Wales and Northern Ireland took place in March, and Scotland's Census will take place in March 2022. These will, in time, provide the most robust and comprehensive picture of the population possible. Before then, and ahead of the official 2020 mid-year estimates, we are aware of the need of users of population statistics for us to carefully integrate new research and findings from migration statistics and methodology to provide the early insights presented in this article.

The methodology used to produce these statistics is based on the National Population Projections (NPP) cohort component method applied to the official mid-2019 population estimates. However, several additional assumptions and simplifications have been made because of the limited availability of input data at this time, ahead of the official mid-2020 population estimates. These statistics are not designated as National Statistics and should not be interpreted as predictions of population change. The indicators of end of year 2020 UK population presented in this release are a form of population projection based on a specific set of demographic assumptions to show what could happen to the size and structure of the UK population in different scenarios if those assumptions were realised.

The early indicators published in this article were produced non-additively, which means the figures for the UK were calculated as a whole area rather than adding together separate figures for each UK country as is the case for official mid-year population estimates.

These statistics are not designated as National Statistics and should not be interpreted as predictions of population change. Nor do they replace official mid-year population estimates for mid-2020 which are planned for publication in summer 2021.

These statistics should only be used to give an early insight on the possible age and sex structure of the UK population ahead of the official mid-year estimates. They are a form of population projection based on a specific set of demographic assumptions to show what could happen if those assumptions were realised.

Demographic assumptions for year to mid-2020

The migration statistics used are based on statistics from the International Passenger Survey (IPS) to February 2020 and modelled estimates (provisional research statistics) for March to June 2020; these account for the additional components of Long-term International Migration (LTIM) where appropriate. These additional components include more comprehensive data for international migration through Northern Ireland, asylum seekers and refugee flows, visitor and migrant switchers (for Quarter 3 (July to Sept) and Quarter 4 (Oct to Dec) 2019 only) and the adjustment made for non-EU student migration (for Quarter 3 and Quarter 4 2019 only). The overall net international migration figure of 282,000 for the year to June 2020 is outlined in Figure 3 and was used to develop the early indicator of the population in mid-2020 presented in this release.

The main limitations of this approach include that the base mortality and fertility assumptions are derived by scaling the 2018-based NPP principal assumptions to match provisional births and deaths; they were not created with direct consideration of the effect of the coronavirus (COVID-19) pandemic.

Demographic assumptions for the six months to end of year 2020

We used the same fertility rates as those used for mid-2019 to mid-2020 because final births data from July to December 2020 were not yet available. The majority of births to 31 December 2020 would have been conceived prior to the coronavirus pandemic. It is therefore possible that any significant change in childbearing as a result of the pandemic would not yet be observed in the data.

Mortality rates were calculated by dividing provisional deaths between mid to end 2020 by the projected mid-2020 population divided by two (to account for half a year of data: July to December 2020). Rates for those aged 96 years and above were assumed to be unchanged from the period mid-2019 to mid-2020, because of limited data availability for older ages.

For international migration, we have provided a range of scenarios for the year, which align with our zero, low and principal migration variant projections included in our most recent 2018-based national population variant projections. Both positive and negative increments were used to simulate net emigration and net immigration into the UK. This is because of the uncertainty in international migration patterns since the pandemic, as indicated by the provisional modelled estimates.

There are several limitations in the approach to developing an end of 2020 population. The end of year 2020 projection was created by continuing the projection to mid-2021 and calculating an average of the mid-2021 and mid-2020 populations. Therefore, this is not a true projection to the end of 2020 that includes seasonal differences in fertility, migration, and mortality. Fertility and mortality assumptions were derived from provisional 2020 data, which are subject to revisions.

Migration data for the year to mid-2020 used published Migration Statistics Quarterly statistics from July 2019 to February 2020 and modelled estimates for March to June 2020. However, because of the lack of final data currently available for the following six months (1 July to 31 December 2020), we provide a range of scenarios.

The five scenarios align with our zero, low and principal migration variant projections (100,000 increments) included in our most recent 2018-based national population variant projections and provide an illustration of the potential size of the population if there were net emigration figures of 50,000 and 100,000 in the six months to 31 December. Both positive and negative increments were used to simulate net emigration and net immigration into the UK. These provide an illustration of the possible size of the UK population.

Further limitations for both years are as follows:

Figure 1: Preliminary data suggest the UK population continued to grow in the year to mid-2020 but at a slower rate than any year since mid-2003

Download this chart Figure 1: Preliminary data suggest the UK population continued to grow in the year to mid-2020 but at a slower rate than any year since mid-2003

Table 1 presents mid-2019 population estimates for the UK alongside an early indicator of the population in mid-2020 and a range of international migration scenario-based figures for 31 December 2020. By mid-2020 our early indicator suggests an overall population of 67.1 million, which represents a 316,000 or 0.47% annual increase from mid-2019. An age and sex distribution for these overall population-level figures is available in the dataset which accompanies this release.

Download this table Table 1: Official 2019 mid-year estimates and preliminary age structure of the UK population in 2020

Figure 2 presents the age structure of the early indicator against our most recent (2019) mid-year estimates. There are variations by age group, which are also clear in the dataset attached to this release. Early indicators suggest modest increases in older ages groups compared with 2019 mid-year estimates. The different migration scenarios have a relatively small impact on the size of the population in all age groups.

Figure 2: Preliminary data on the age structure of the UK population for 2020 suggests modest increases in older age groups compared with 2019 mid-year estimates

Download this chart Figure 2: Preliminary data on the age structure of the UK population for 2020 suggests modest increases in older age groups compared with 2019 mid-year estimates

The latest official estimates of international migration for the year ending March 2020 remain those that were reported in the August 2020 Migration Statistics Quarterly Report. We are still working to fully understand changes in international migration during this period. The modelled estimates are provisional and subject to change as we complete further work in this area.

The monthly International Passenger Survey estimates of international migration flows have been derived for the purpose of producing modelled estimates and should not be treated as Official Statistics or used in any other context.

Download this chart Figure 3: More people left the UK than arrived between March and June 2020, leaving net migration for the year ending June 2020 at 282,300

Figure 4: Our early indicator for mid-2020 suggests relatively smaller population growth than was projected in the 2018-based National Population Projections 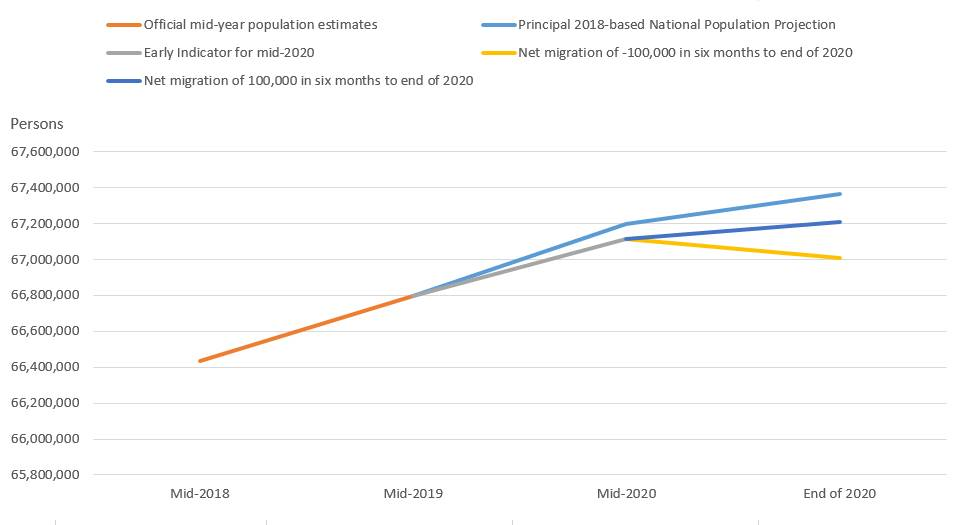 Download this image Figure 4: Our early indicator for mid-2020 suggests relatively smaller population growth than was projected in the 2018-based National Population Projections

Figure 5: Our early indicator for mid-2020 suggests that at the oldest age group, 80 years and over, we see the largest difference compared to 2018-based National Population Projections

Download this chart Figure 5: Our early indicator for mid-2020 suggests that at the oldest age group, 80 years and over, we see the largest difference compared to 2018-based National Population Projections

In summer 2021 we will publish the official mid-year population estimates for mid-2020. These will provide a detailed and geographically granular age and sex profile of the population. In spring 2022 we are planning to publish a provisional release of Census 2021 data, which will provide further detail on the population of England and Wales. Northern Ireland Census data will be released in summer 2022. When available, census data for Scotland (where the census takes place in 2022) will be combined to form UK-level comparisons.

When Census 2021 data are available for England and Wales, the Office for National Statistics (ONS) Centre for Ageing and Demography will integrate this into population estimates and projections including reconciliation and rebasing of the population of England and Wales in the decade since the 2011 Census. This will provide the most detailed, reliable, and up-to-date information on the England and Wales population.

National population projections: 2018-based
Bulletin | Released 21 October 2019
The potential future population size of the UK and its constituent countries. This is widely used in planning, for example, fiscal projections, health, education and pensions.

Exploring how the UK population and workforce are changing in the pandemic
Blog post | Released 23 March 2021
Jonathan Athow looks at the work that is taking place to identify new data that tell us more about the labour market and give us new insights into the UK population.