This note covers the comparison of ONS population estimates by nationality to European Union Settlement Scheme (EUSS) applications data published by the Home Office. It explains why caution is needed in comparing these two sets of statistics and sets out what is happening within the ONS to improve our understanding of international migration.

This note focuses on two sets of statistics: the ONS population estimates by nationality and Home Office European Union Settlement Scheme (EUSS) statistics. We are aware that statistical users and decision-makers are interested in understanding whether these data sources can be used to understand the proportion of EU citizens currently resident in the UK that have applied for the EUSS, and the characteristics of those that have and have not applied.

However, while both data sources provide valuable insights on a particular aspect of migration, they cannot be directly compared due to differences in what the statistics measure and how they are compiled.

This note summarises what each set of statistics cover, the insights and value that can be drawn from them, then goes onto explain the main differences between them and why it is not possible to make a truly like-for-like comparison. We also explain how the ONS is working with the Government Statistical Service (GSS) to transform population and migration statistics and provide more evidence to support decision-makers in future.

These estimates are based on data from the Annual Population Survey (APS) which is a survey of private households in the UK. The resident population covers people who regard a sampled household as their main address.

Whilst this has broad coverage of the UK population, it is important to note that the survey does not include the majority of people living in communal establishments, such as care homes, hostels and halls of residence. Consequently, the published estimates exclude non-British citizens living in these establishments, particularly non-British students living in halls of residence2. The estimates also do not include people who are absent from a household for more than six months, or people who are staying in the UK on a shorter-term basis (and do not consider the household to be their main residence), nor do they tell you whether those in the resident population at a certain point in time will continue to remain in the UK on a permanent basis.

Notes for: Understanding the EU population resident in the UK – what does the current data tell us?

Since May 2019, the Home Office has published monthly and quarterly statistics on the number of applications to the EU Settlement Scheme (EUSS) and their outcomes1. The EUSS enables resident EU, other EEA and Swiss citizens, and their family members, to obtain the status they will require to live and work in the UK after 30 June 20212.

The monthly publications provide more timely updates on the high-level progress of the EU Settlement Scheme, whereas the quarterly release provides users with greater detail on the applications received, their outcomes and additional supporting data.

The latest monthly statistics were published in February 2020. These showed that, overall, the total number of applications received up to 31 January 2020 was more than 3.1 million (3,107,900).

Notes for: Understanding the EU Settlement Scheme – what does the current data tell us?

Although it may seem that these two publications cover equivalent populations, a simple comparison of numbers of EUSS applications and the ONS population estimates cannot be used as a proxy for estimating the proportion of eligible people who have applied for the EUSS. This is because, whilst there is a broad overlap in the population covered by the two sets of statistics, there are still important differences in coverage, accuracy and timing. These are explained in the following sections in more detail.

The following diagram shows the main overlaps and differences in coverage:

Figure 1: Why UK population by nationality statistics do not cover the same EU, EEA and Swiss citizen population as those eligible to apply for the EU Settlement Scheme 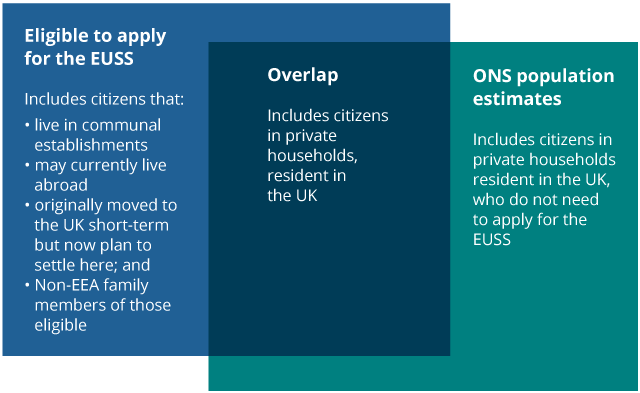 Download this image Figure 1: Why UK population by nationality statistics do not cover the same EU, EEA and Swiss citizen population as those eligible to apply for the EU Settlement Scheme

Additionally, neither set of statistics covers people’s intentions to apply for the EUSS. The ONS population estimates include people who are resident in the UK for a range of reasons, some of whom may have no intention to settle here on a permanent basis. Whilst some of these people may therefore meet the eligibility criteria for the EUSS, they may never apply, or intend to apply, for the scheme. This means that, alongside it not being possible to compare the two sources to understand the proportion of eligible people who have applied, it is also not possible to compare them to understand the proportion who may intend to apply but have not yet applied.

The Home Office have also made these differences clear in their statistical publication on the EUSS. It states that:

“Figures in this publication refer specifically to applications made to the EU Settlement Scheme and cannot be directly compared with estimates of the resident population of EU/EEA nationals in the UK. Figures in this report include non-EEA family members, and eligible EEA citizens not resident in the UK1. None of these are usually included in estimates of the resident EU population. Furthermore, the population estimates do not take account of people’s migration intentions and will include people who have come to the UK for a range of purposes, including some who have no intention to settle in the UK.”

The ONS population statistics and Home Office EUSS statistics are based on different data sources and methodologies, which should be taken into account when making comparisons.

In contrast, the ONS population estimates are based on a household sample survey and are subject to statistical uncertainty. Confidence intervals are calculated around the sample result, reflecting the range of values where the true number is believed to be. This is particularly important when interpreting the estimates at more detailed local level, where there is typically greater uncertainty that should be taken into account when understanding the likely size of the population.

Caution should also be applied because of the difference in the timeliness of the data and in the use of different units of measurement. The Home Office data on applications refers to the previous month, the population estimates by nationality are a 12-month average published five months after the event.

Notes for: What are the differences between these statistics?

Taken together, these differences mean it is not possible to make comparisons between the statistics on a truly “like-for-like” basis. They are also likely to explain why we can see certain patterns in the data. For example, more EUSS applications from Bulgarian citizens (156,600) have already been received than the estimated number of Bulgarian nationals currently resident in the UK population estimates (109,000). There have also been a higher number of applications received than the estimated resident population for a small number of other nationalities, including Romania, Hungary, Portugal, Spain and Italy1.

For the reasons set out previously, it does not necessarily mean that all Bulgarian citizens in the UK have applied for the EUSS, or that the ONS population statistics have underestimated the number of Bulgarians resident in the UK. Instead, the differences between the two data sources means there could be a number of Bulgarian citizens eligible for the EUSS who would not be included in the coverage of ONS population estimates. For example, those who are currently living abroad but are eligible to apply.

As set out in our recent research article, the ONS and the GSS are transforming migration and population statistics to make use of all available data to get a deeper understanding of the UK population, with migration as a priority research area. However whilst we will be able to provide a more detailed evidence base in future, it is important to recognise that there will continue to be factors that need to be taken into account when comparing ONS population estimates with other official statistics on immigration.

For example, a more precise record of the number of EU citizens resident in the UK would still not reflect the fact that there will be some people in this group who would not be expected to apply for the EUSS, such as those that do not plan to settle in the UK permanently. It is therefore not possible to arrive at a fully comparable understanding of who in the population may be likely to apply, without knowing more about the intentions of different groups of migrants in relation to the EUSS – something which cannot be measured based on current administrative data sources.

This highlights the ongoing need for caution when looking at these data sources together. If you would like to get in touch with any feedback on this note, please contact us at pop.info@ons.gov.uk. We’re also publishing an update on our work to transform population and migration statistics later this month, and we would welcome feedback on our plans to help shape our ongoing work.