From having an inside toilet to how many of us are married, newly digitised data show how the ways we live changed from 1961 to 2011.

Life in England and Wales changed dramatically between 1961 and 2011, from the homes we live in to our relationships and everyday amenities.

Recently digitised data from the 1961 Census Small Area Statistics can show these changes in detail at a local level for the first time.

They also show how the picture provided by the census of people’s needs and lives has always been useful.

Explore how areas compared with each other with our interactive maps and see what changed in the 50 years up to 2011.

This article is produced with thanks to the 2,800 volunteers who made 5.5 million checks to help turn scans of the 1961 Census Small Area Statistics into digital tables.

We take it for granted now that you have a flushing toilet at home but in 1961, indoor toilets were much less common.

The census that year asked if people had a toilet inside or attached to the home they were living in. Nearly 7% of households in England and Wales did not.

Outdoor toilets could be in a separate building in the garden, or in some cases, a communal toilet for the street.

In some rural districts, more than half of households had a toilet separate from their property.

Of the 1961 districts with the highest proportion of homes without inside or attached toilets, the top 50 were all rural areas, ranging from 39% of homes without a toilet in Teifiside in Wales, to as high as 59% in the area of Mitford and Launditch in Norfolk.

The 1961 Census also asked if households had a fixed bath with waste-water plumbing. Those who didn’t have a fixed bath sometimes had a table-top or standalone bath, filled and emptied by bucket or ladle from a water heater.

You can explore the results for both questions using the interactive maps. They display data on the map of England and Wales as it looked in 1961, so your area may look different to how it is today. The letters after place names are part of their description – a rural district (RD) is a distinct area from an urban district (UD) or a metropolitan or municipal borough (MB).

Homes without a fixed bath in 1961

The 1961 Census also asked about access to a cooking stove, a kitchen sink and hot water, questions that were removed on the 1981 Census. But questions about inside toilets and a fixed bath remained on the census as recently as 2001. 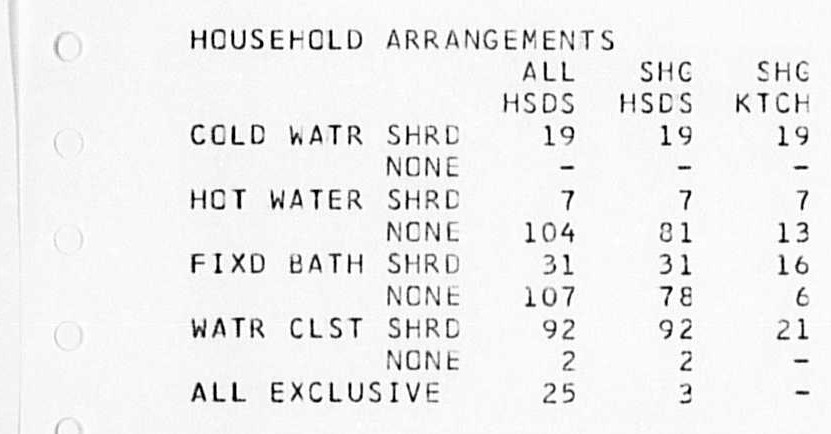 Download this image Household amenities from a 1961 area microfilm printout

Census questions about heating have also evolved. We didn’t ask about central heating until 1991, and in 2021, the census started asking about homes heated using renewable energy.

Censuses are snapshots, so they can’t tell us how many times someone has been married or in a civil partnership but the differences between these figures for 1961 and 2011 reflect a period of stark social change.

People are marrying and divorcing more in older age groups

The proportion of people married was lower in 2011 in almost every local area of England and Wales than 50 years previously.

Only 6 local authority areas, as they existed in 1961, saw an increase in marriage. Most of these areas, and the places that saw the smallest reduction in marriage, were rural, possibly because of communities being typically older.

Since 2003, there has been a drop in divorce, both because of fewer people being married and people typically getting married later – marriages at older ages tend to be less likely to break up.

Some of these areas also had some of the largest increases in population of people aged 75 years and over, such as Hunstanton urban district on the east coast of Norfolk.

Renting was the norm for most households in 1961. Only 42% of households owned their own home, and in several areas of central London, home ownership was lower than 10%.

By the time of the 2011 Census, 50 years on, home ownership had risen to 64%. The lowest home ownership was still in London areas, as they existed geographically in 1961, the very lowest being in the area that was the 1961 metropolitan borough of Shoreditch, at 16%.

Housing tenure in a 1961 microfilm printout

Download this image Housing tenure in a 1961 microfilm printout

These “New Towns” were part of efforts to meet housing shortages after the Second World War by building new settlements, such as Stevenage and Crawley. The developer corporations were dissolved, and rented homes handed over to local councils, which is why the category does not exist today.

The introduction of the “Right to Buy” policy in 1980 allowed council tenants to buy the home they rented and, in some instances, council housing was replaced by properties owned by private landlords.

In some places, there were quite dramatic changes in tenure. In Kirkby, near Liverpool, a New Town had been built post-war to meet housing shortages. In 1961, 91% of homes in the area were owned by the council or New Town corporation. In the 2011 Census, only 15% of homes were council owned.

Home ownership hasn’t risen continuously in the 50 years up to 2011. In recent years, the rising cost of housing relative to people’s income as well as the effects of the 2008 recession has seen home ownership fall.

Between 1961 and 2011, the population increased and became proportionally older. This was a result of increased life expectancy and declining birth rates.

There are a few exceptions, such as in some parts of Sussex and London. In what was the municipal borough of Hove, the proportion of over-75-year-olds dropped from 11% to 7% between 1961 and 2011, and in Hastings county borough it went down from 10% to 8%.

Population has aged in most areas of England and Wales

As the population grew, people needed more homes outside of city centres as they existed in 1961.

Some of these were the New Towns, which included new settlements built between 1961 and 2011. These include Milton Keynes and Northampton, which account for the local areas with the largest increases in population in the 50 years.

Proportionally, the places with the biggest populations in England and Wales in 2011 were the same six urban districts as they were in 1961, as defined by historical 1961 boundaries: the cities of Birmingham, Manchester, Leeds, Liverpool, Sheffield and Bristol.

Of those six urban centres, five also saw the biggest reductions in the proportion of the population of England and Wales they were home to between censuses. The city of Birmingham, as it was defined in 1961, went from housing 2.4% of the population to 1.7%.

Places that saw an increase in population proportion between censuses were generally areas that in 1961 were classed as rural districts. As cities spread, people moved and the New Towns were built, some of these previously rural districts became more urbanised.

See how the population has changed in an area using this interactive map. We’ve used the 1961 map with all of the council areas as they were then as the basis for both maps to allow comparison between the two.

In most areas of England and Wales, people in 2011 lived in less crowded homes than in 1961, not in terms of space, but in terms of people.

People filling out the census in 1961 and 2011 told us how many rooms they had and how many people lived in their home.

We can use this to calculate “persons per room”, where rooms include kitchens and conservatories but not bathrooms and store cupboards or corridors.

One person per room could mean one person in a single room, or 5 people in a 5-room house.

It can’t tell us how much space each person has – one room may be a very small studio or a large kitchen-diner – but it does tell us we’re getting more spread out in how we live as households.

Possible reasons for this are wide-ranging and include new housing reducing the need for multi-generational households, people having fewer children and older people living longer in family houses.

Nearly every local area as they were in 1961 (over 99%) has seen an increase in the number of households in that area that have 1 person per room or less, showing households have more rooms available per person to live in.

Some areas have bucked this trend, where homes had more people per room. In a few areas, notably East Ham (Essex) county borough, Southall (Middlesex) and Leyton (Essex) municipal boroughs, there was an increase in the percentage of households that had between 1 and 1.5 persons per room compared with 1961, and also households with more than 1.5 persons per room.

This analysis is the first to be published from the Historic Censuses Digitisation Project, as part of our statistical archaeology work. Your feedback and comments would be welcomed. Understanding what interests you and how you use or interpret the analysis will assist us with the production of data stories from the 1921 Census digitised data.

We’re continuing digitisation work with our partners at the University of Salford Pattern Recognition and Image Analysis Research Lab (PRImA) who have carried out innovative research and developed software tools and workflows to enable high quality digitisation of printed tabular statistics.

The digitisation process started with optical character recognition (OCR) of over 140,000 digital images of the small area statistics outputs held by the ONS. This process recognised over 95% of the characters and numbers contained within the images.

In an effort to extract the extra 5% of characters, the PRImA team used crowdsourcing via the citizen science platform Zooniverse. Over 2,800 volunteers classified images by the submission of figures from the images presented to them, 5.5 million classifications in total.

Interactives are produced with thanks to the National Library of Scotland, for the use of historical maps.

We’re currently working on 1921 county and topic report tables and other census years alongside the release of 2021 data next year. To find out more, sign up for GovDelivery updates on our historical census work.

The 1961 Census Small Area Statistics are available in beta release on Nomis. Feedback on the tables and analysis is welcome using the contact details below.