Internet access in Great Britain, including how many people have internet, how they access it and what they use it to do.

The internet continues to change the way people go about their lives, especially in areas such as shopping and communication. In 2015, over three quarters of adults in Great Britain used the internet every day, or almost every day (78%) and a similar proportion (74%) accessed the internet “on the go” (away from home or work).

The Internet Access Survey results are derived from the Opinions and Lifestyle Survey (OPN). Estimates for 2015 in this release refer to data collected in the January, February and April 2015 modules of the OPN.

We first collected statistics on internet access in 1998. Since then, various changes have been made to the Internet Access Survey, including the publication of annual results since 2006. Where possible, comparisons over time are made in this release. However, the available coverage for time series comparisons varies, as the questions included in the survey change each year.

In this release, new estimates by disability status have been introduced, to accompany breakdowns by age group and sex. These breakdowns are based on respondents reporting that that they have a health condition or illness in line with the Equality Act definition of disability. These new estimates show that adults with the status of “Equality Act disabled” consistently reported lower rates of internet activities than those who did not have this status.

We are constantly aiming to improve this release and its associated commentary. We would welcome any feedback you might have and would be particularly interested in knowing how you make use of the data to inform your work. Please contact us via email: esociety@ons.gov.uk or telephone Cecil Prescott on +44 (0)1633 456767.

Since 2012, a series of annual events has been held on the theme of the changing shape of business. These have been jointly co-ordinated with the Department of Business, Innovation and Skills (BIS). The last event, The changing shape of UK manufacturing, was held on 22 October 2014.

On 8 October 2015, we will be holding the next event in the series, called “How e-commerce is changing the shape of business”. This will be held at the BIS Conference Centre, London. The event will feature a range of talks from users, producers and suppliers of e-commerce business statistics, from government, international organisations and business. For more information about the event, or to register your attendance, please email BusinessStatisticsUserConference@bis.gov.uk.

Download this chart Figure 1: Daily computer use by age group, 2006 and 2015, Great Britain

Download this chart Figure 2: Daily internet use by adults, 2006 to 2015, Great Britain

The availability of wireless (wifi) hotspots has been rapidly increasing and thousands of hotspots are available across the country at various places, such as pubs, cafes, hotels and others. 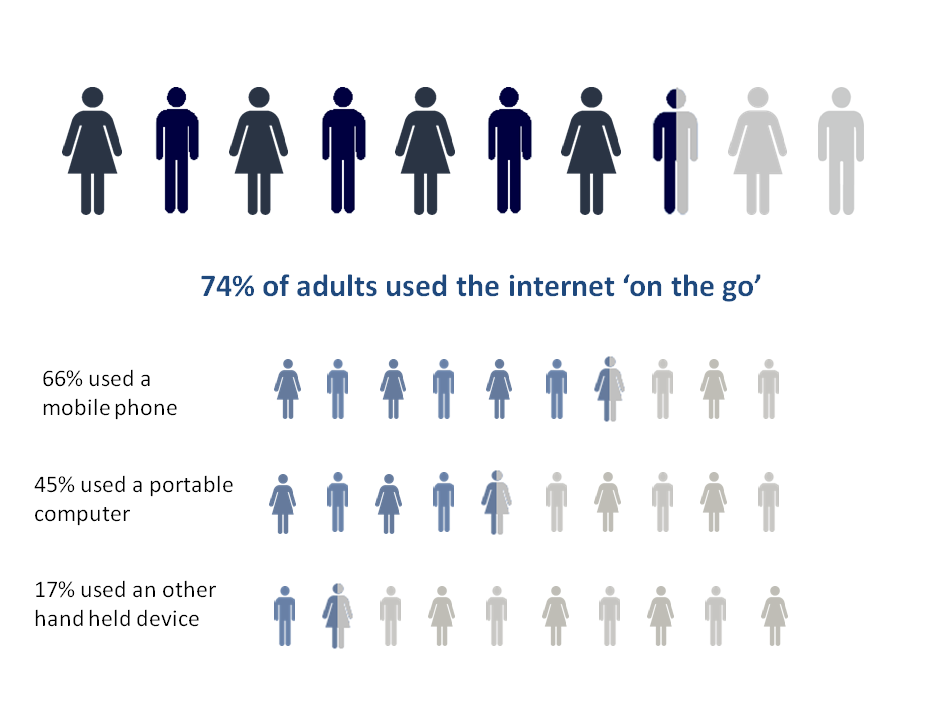 Of the internet activities surveyed in 2015, email remained the most common, with 76% of adults having used the internet for this purpose. This was an increase of just 1 percentage point since 2014, but 19 percentage points since the 2007 estimate of 57%. The second most common internet activity in 2015 was finding information about goods and services, undertaken by 69% of adults. This estimate is up from 58% in 2007, but down slightly compared with 73% in 2014.

The number of high street shops has been in decline, as highlighted by the BBC. In recent years there has been strong growth in internet shopping. In 2015, more than three quarters (76%) of adults reported buying goods or services over the internet in the last 12 months, up from 53% in 2008. Younger adults have embraced internet shopping, with 65% of those aged 16 to 24 purchasing over the internet in 2008, rising to 90% in 2015. This was twice the proportion of adults aged 65 and over (42%) who bought online in 2015. However, there was large growth in the rate of online purchasing by those aged 65 and over, rising from 16% in 2008.

In 11 of the 15 categories surveyed, adults aged 35 to 44 reported the highest (or joint highest) rates of internet shopping.

Figure 6: Purchases made over the internet by age group, 2015, Great Britain 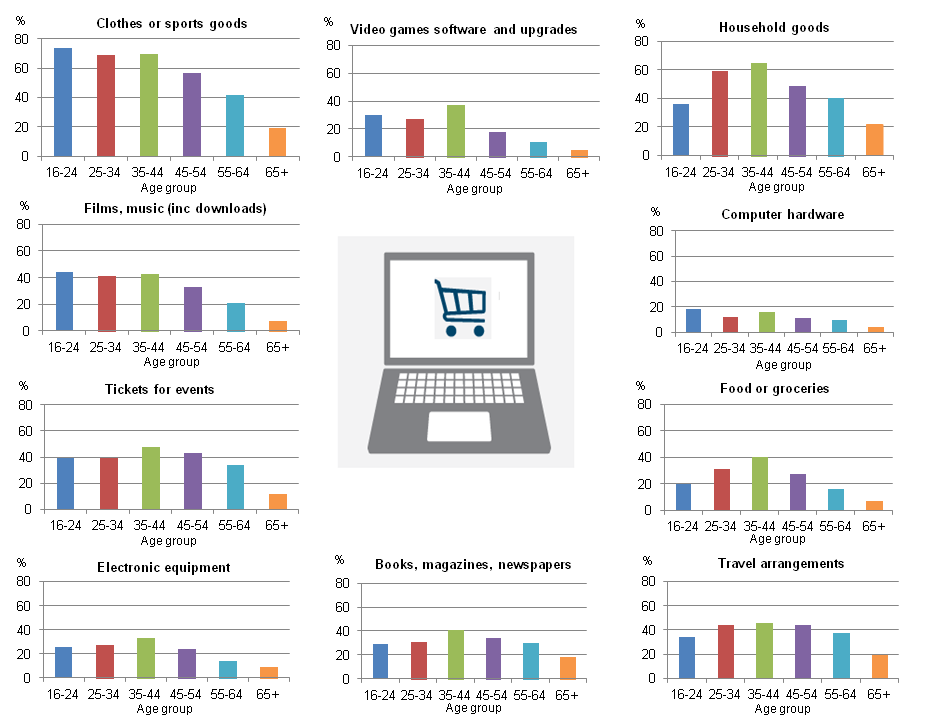 Download this image Figure 6: Purchases made over the internet by age group, 2015, Great Britain

Purchases valued from £100 to £499 were the most common across all age groups. Unlike many of the comparisons in this release, there was relatively little difference between the age groups in the values of their internet expenditure. Of those aged 16 to 24, 49% spent on purchases in this range, compared with 42% of those aged 65 and over.

In 2015, adults who had bought or ordered goods or services online were asked about problems they may have encountered. The most common problems encountered were “technical failure of website during ordering or payment” and “speed of delivery slower than indicated”, both at 27%. However, 50% reported that they had not encountered any problems with internet purchasing.

Adults who had not bought over the internet in the last 12 months were asked why this was. The most common reason, given by 58%, was that they “preferred to shop in person”. “Payment security or privacy concerns” were cited by 27% of these adults and “lack of skills or knowledge” by 19%.

In 2012 the UK government launched a “digital by default” strategy whereby public services would be migrated to the internet. This Digital Transformation began with work to move 25 services online.

In 2015, the most common reason for using the internet to interact with public authorities or services was to obtain information from websites, (33% of adults), followed by submitting completed forms (30%) and downloading official forms (24%).

A range of security problems are experienced when adults use the internet. In 2015, 17% of adults who used the internet in the last 12 months had caught a virus or other infection on their computer (for example, a “worm” or “trojan”), which resulted in a loss of information or time. However, the other categories of security problems that were surveyed were experienced by very few internet users. Just 3% reported that they had experienced abuse of personal information, and/or other privacy violations and 3% experienced financial loss due to fraudulent messages or fake websites.

Adults also reported awareness of internet security issues. Of those who had used the internet in the last 12 months, 65% were aware that cookies can be used to trace online activity and 52% had made back up files to an external storage device or to internet storage space.

The availability of internet storage space has grown in recent years with services such as iCloud, Dropbox and Google Drive available for free. In 2014, 67% of adults were aware of services to store information and data on the internet and in 2015, 40% of adults had used such services.

In 2015, 86% of households in Great Britain (22.5 million) had an internet connection. This was up from 84% in 2014 and 57% in 2006. Household internet access has increased since we first began collecting these statistics in 1998. There were changes in the survey source, periodicity and coverage over the period 1998 to 2005. This means that the estimates prior to 2006 are not directly comparable with the annual estimates from 2006 onwards, but they have been provided as our best available indication of growth over this period.