Internet access in Great Britain, including how many people have internet, how they access it and what they use it to do.

The Internet has changed the way people go about their daily lives. Almost three quarters of adults in Great Britain used the Internet everyday (73%) in 2013, with 6 out of every 10 adults (61%) using a mobile phone or portable computer to access the Internet 'on the go'.

In 2013, more people than ever before used the Internet for reading newspapers or magazines (55%), to access their bank accounts (50%), to seek health information (43%) or to buy groceries (21%). This release highlights that activities previously carried out on the high street, are now increasingly being carried out online.

This release reveals that adults aged 25 to 34 used the Internet more than any other age group to carry out a wide range of established ‘every day’ activities, such as purchasing goods or services online (92%), Internet banking (76%) and selling goods online (45%).

The results in this release are derived from the Opinions and Lifestyle Survey. On 14 August 2013, ONS will publish the latest quarterly statistics on adults who have ever or never used the Internet within the Internet Access Quarterly Update, Q2 2013 statistical bulletin. The quarterly estimates are derived from the Labour Force Survey (LFS). The LFS has a much larger sample than the Opinions and Lifestyle survey and therefore allows for more detailed socio-demographic analysis to be undertaken. The Quarterly Update should be used as ONS’ official source for the number of individuals in Great Britain accessing the Internet.

ONS first collected statistics on Internet access in 1998. Since then, a number of changes have been made to the Internet Access survey, including the publication of annual results since 2006. Where possible, comparisons over time are made in this release. However, the available coverage for time series comparisons varies, because the questions included in the survey vary each year.

We are constantly aiming to improve this release and its associated commentary. We would welcome any feedback you might have, and would be particularly interested in knowing how you make use of these data to inform your work. Please contact us via email: esociety@ons.gov.uk or telephone David Matthews on +44 (0)1633 456756.

On 15 May 2013, as part of the Internet Access Quarterly Update, ONS reported that 42.4 million people in Great Britain had used the Internet, representing approximately 86% of the adult population. Use of a computer is inextricably linked to the ability of an individual to use the Internet. In 2013, 70% of adults in Great Britain used a computer every day, up from 45% in 2006.

A sizable increase in daily computer use, by age, in the past seven years has been for adults aged 65 and over. In 2006, just 9% reported that they used a computer every day, this compares to 37% in 2013.

In 2013, 36 million adults in Great Britain used the Internet every day, or almost every day. This represented 73% of those aged 16 and over and was more than double the number of adults (16 million) that used the Internet daily in 2006 (when directly comparable records began). Daily Internet use has increased by 2.5 million since 2012.

There are distinct differences in how individuals make use of the Internet when analysed by age. As ‘early-adopters’, it is of little surprise that those adults in the two youngest age groups (16 to 24 and 25 to 34) are proportionately the largest users of many of the Internet activities surveyed.

In 2013, adults aged 16 to 24 were most likely to engage in online activities that focused on leisure or recreation; especially new activities such as social networking (93%), consulting wikis (60%), downloading software (55%) and telephoning or making video calls over the Internet via a webcam (40%).

Adults aged 25 to 34 reported the highest level of use in many of the activities surveyed, in particular day-to-day activities such as sending emails (89%) and finding information about goods and services (77%). This trend is particularly evident when considering online banking where over three quarters (76%) of those aged 25 to 34 accessed their bank accounts over the Internet. This compares to only half of all adults (50%).

In 2013, with reports of decreased physical newspaper readership, there has been media interest in how people will access the news in the future. Over half of all adults (55%) used the Internet to read or download the news, newspapers or magazines in 2013, compared to only 20% of adults in 2007. Those aged 25 to 34 (72%) were most likely to read or download news online. Almost half (49%) of 55 to 64 year olds reported that they now access news online.

Social networking has been one of the major success stories of the Internet age and its use continues to grow. In 2013, over half (53%) of all adults participated in social networking, up from 48% in 2012. Almost all adults aged 16 to 24 (93%) have used social networks, but it is important to note that its use is not solely confined to the youngest age groups, with one in every two adults (50%) aged 45 to 54 year olds now reporting that they partake in social networking.

There has been significant growth, in the last six years, in adults selling goods or services online. In 2007, only 1 in 10 adults (12%) used sites such as eBay or Gumtree to sell goods online. This had more than doubled by 2013, with 28% of adults selling goods over the Internet. Of those aged 25 to 34, just under half (45%) reported that they had now sold goods or services online.

Using services related to travel and travel related accommodation is one of only three activities favoured by those aged 55 to 64 to a greater degree than the youngest age group aged 16 to 24; at 51% and 46% respectively. In total, one in every two adults (50%) indicated that they used the Internet for this activity.

The Internet has become a key tool for those looking for work.

Approximately two thirds (67%) of those who were unemployed indicated that their computer skills were sufficient if they needed to start a new job. This figure compares to 72% of adults currently in employment.

Figure 5: Using the Internet to seek employment or training by economic status, 2013

Download this chart Figure 5: Using the Internet to seek employment or training by economic status, 2013

The convenience of Internet shopping has proved very popular for consumers. The Eurostat report ‘Internet use in households and by individuals in 2012’ which published data relating to UK residents aged 16 to 74 (rather than for all adults, including those aged over 74 years, in Great Britain which is the basis of this statistical bulletin), compared rates of online shopping across the EU. It reported that the UK had the highest rate of online purchasing, with 82% of Internet users buying online, slightly ahead of Norway at 80%, followed by Denmark and Sweden both at 79%.

Map 1: Internet purchasing by individuals in the last 12 months by country, 2012 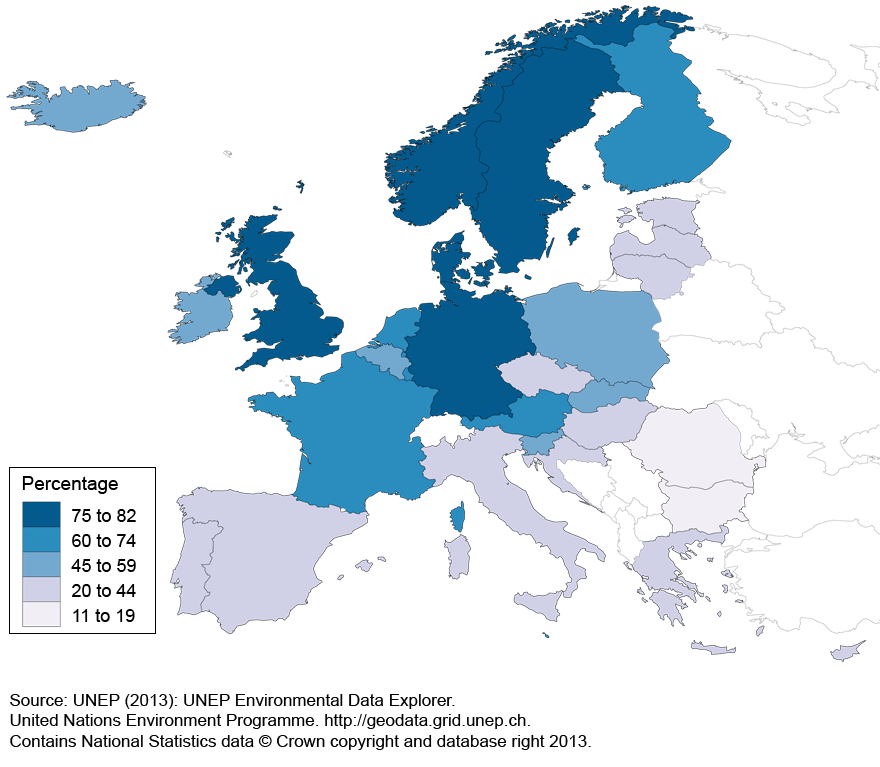 Download this image Map 1: Internet purchasing by individuals in the last 12 months by country, 2012

In 2013, as regular stories appear in the media reporting the decline of the high street, it is interesting to note that almost three quarters (72%) of all adults reported buying goods or services online. This has risen from 53% since 2008. While younger age groups have traditionally embraced Internet shopping (92% of 25 to 34 year olds), there has been significant growth in the rate of online purchasing by those aged over 65. Over a third of those aged 65 and over bought online (36%) in 2013, more than double the 2008 estimate of 16%.

There is a noticeable difference in the type of goods bought online, when analysed by age. In 2013, for example, only 15% of those aged 16 to 24 bought food and groceries online, compared with 34% of those aged 35 to 44.

Figure 6: Purchases made over the Internet by age group, 2013

Download this chart Figure 6: Purchases made over the Internet by age group, 2013

In 2013, one in every two adults (50%) who bought films or music online downloaded the content or accessed it via a streaming website such as Lovefilm or Netflix. Men (53%) were more likely to do this than women (47%).

Over half of all adults (52% of both men and women) who bought reading material online, such as books, magazines, newspapers or e-learning material, did so via download or bought eBooks for readers such as Kindle or Nook.

In October 2012, the UK’s first 4G network was launched, offering faster mobile broadband than the existing 2G and 3G networks previously provided. In 2013, the 4G network is set to expand, with more providers due to launch 4G services. Recent developments have not only been limited to mobile broadband, with the availability of wireless (wifi) hotspots increasing at a rapid rate. Leading companies provide thousands of hotspots across the country. These are now regularly seen at locations such as pubs, cafes and hotels. The availability of both mobile broadband and wifi networks means the mobile Internet is now used by more people than ever before.

The most popular device used to access the Internet ‘on the go’ was a mobile phone, with over half of all adults (53%) accessing the Internet this way. This has more than doubled since the 2010 estimate of 24%. 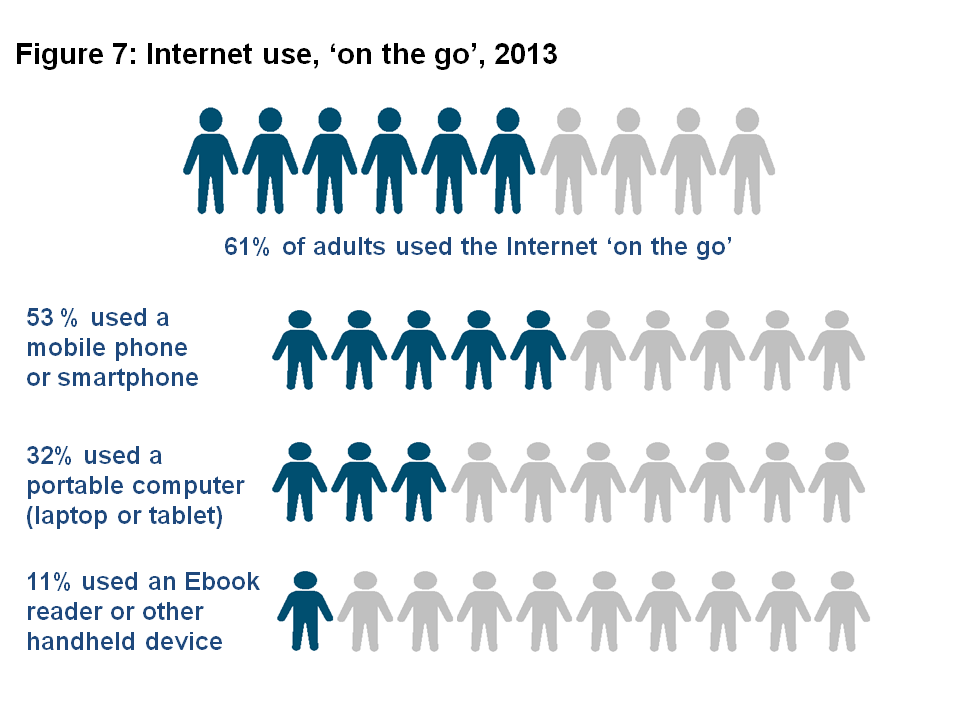 Almost 9 in 10 (89%) adults aged 16 to 24 used their mobile phone to access the Internet. However, this type of access is not solely limited to the early-adopting, younger age groups with just over half (51%) of those aged 45 to 54 accessing the mobile Internet on their mobile phone.

One fifth (21%) of 16 to 24 year olds reported using a device such as a games console or eBook reader to access the Internet away from home or work. This type of access was heavily favoured by the younger age groups, with just 10% of 45 to 54 year olds accessing the Internet over these devices and only 11% of all adults.

In April 2013, the UK Government published details of a system of “Universal Credit”; a change to the benefits system in which “most people will apply online and manage their claim through an online account”. This is likely to have a significant impact on the numbers of adults who use the Internet to interact with public authorities and services online.

In 2013, the most popular reason for accessing a public authority or service website was to obtain information. Approximately, 31% of adults obtained information from public authorities or services such as local authorities, schools and universities, or government departments. For example, as reported earlier, it is likely that a proportion of those adults (43%) that used the Internet to seek health related information used public health websites such as NHS direct.

There were 4 million households in Great Britain without Internet access in 2013, compared with 10 million in 2006. Figure 9 clearly shows that Internet access by households has increased dramatically since ONS first began collecting these statistics in 1998.

There were changes in the survey source, periodicity and coverage over the period 1998 to 2005; consequently these estimates (from 1998 to 2005) are not directly comparable with the annual estimates from 2006 onwards, but have been provided as our best indication of growth over this period. 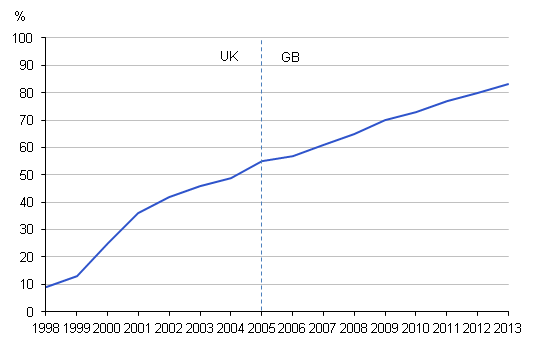 Internet access varies depending on household composition. The majority of households with children have an Internet connection (97%). This is the same figure as households made up of three or more adults (including homes of multiple occupancies such as student accommodation).

Households accessing broadband, via fibre optic or cable connections, increased by 12 percentage points since 2012 (30%), to 42% in 2013. This is likely, as mentioned earlier, to be a result of increased investment into the availability of fibre optic connections. In comparison, DSL broadband is beginning to lose its dominance. In 2013, only 45% of households reported using a DSL connection, down from 57% in 2012.

Download this chart Figure 10: Household Internet connection by type, 2012 and 2013