Index of cancer survival for Clinical Commissioning Groups in England: Adults diagnosed 1998-2013 and followed up to 2014

A small correction has been made to text and graph legends to add interpretation. No data has been altered. We apologise for any inconvenience.

The inequality in cancer survival between the highest and lowest CCG in England has shrunk since 1998 .

This bulletin focuses on trends in the 1-year survival index for all cancers combined for each of the 209 Clinical Commissioning Groups (CCGs) and for England as a whole. Separate 1-year survival estimates for breast (women), colorectal (bowel) and lung cancer are being introduced into this bulletin at CCG level for the first time. These estimates are age-standardised for breast cancer and age-sex-standardised for colorectal and lung cancers. Net survival (Background note 1 ) is estimated for adults (aged 15 to 99 years) who were diagnosed with cancer between 1998 and 2013 and followed up to 31 December 2014.

Confidence intervals (at the 95% level) are provided for each survival estimate in the reference tables . Survival is estimated using flexible parametric models (Background note 8 ). More information about methodology and quality information can be found in the “Background notes” section and in the Quality and Methodology Information paper.

This publication is produced in partnership with the Cancer Research UK Cancer Survival Group at the London School of Hygiene & Tropical Medicine.

Download this image London School of Hygiene and Tropical Medicine

Figure 1: Funnel plot of the 1-year survival index (per cent) for all cancers combined, for Clinical Commissioning Groups (CCG): England, adults (aged 15 to 99) diagnosed in 1998 and in 2013

Download this image Figure 1: Funnel plot of the 1-year survival index (per cent) for all cancers combined, for Clinical Commissioning Groups (CCG): England, adults (aged 15 to 99) diagnosed in 1998 and in 2013 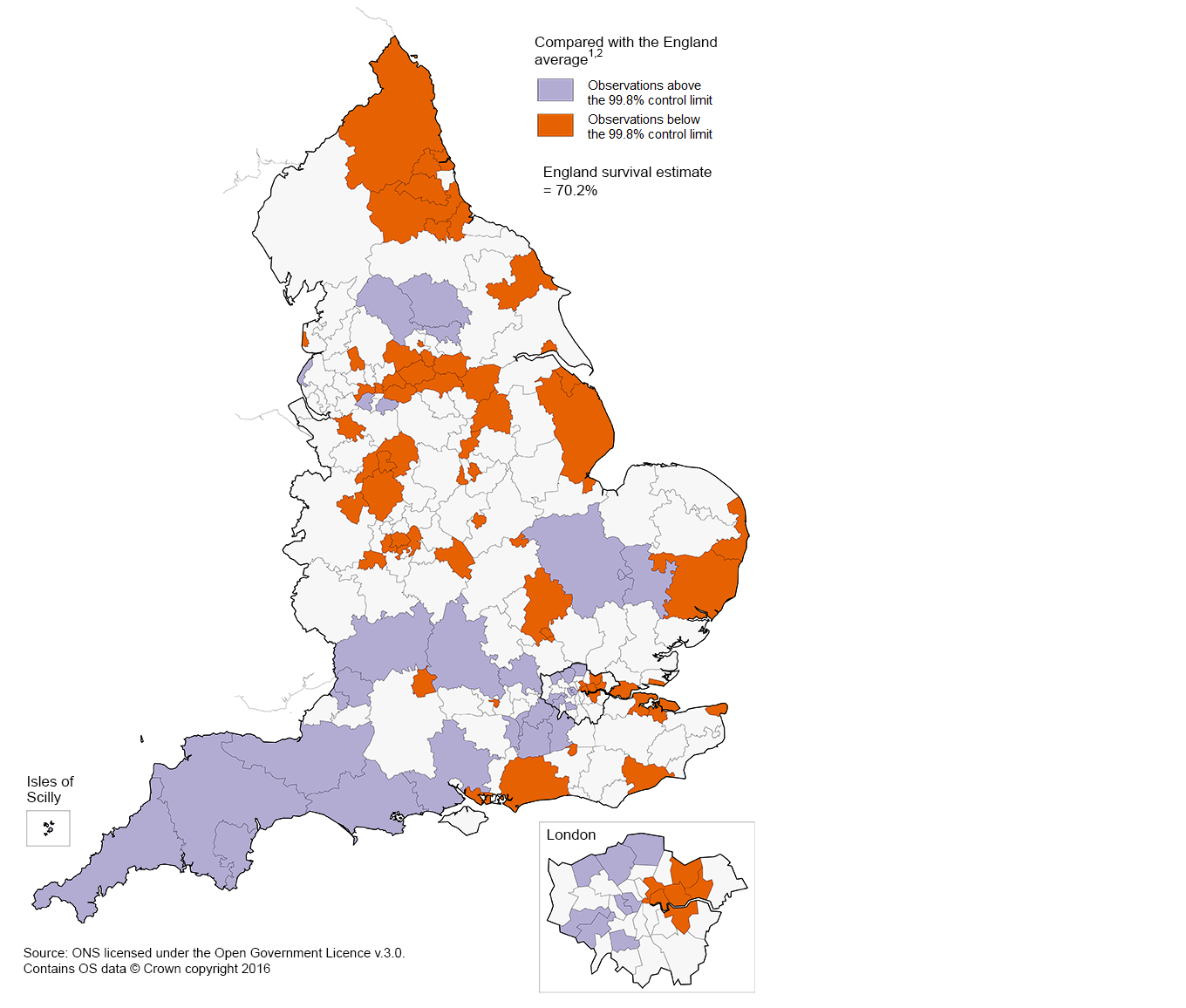 Estimates of 1-year age-standardised survival for breast cancer (women), and age-sex-standardised survival (Background note 11) for colorectal and lung cancer in each CCG have been introduced into this bulletin for the first time. Funnel plots for 2013 are provided in the commentary whilst funnel plots for 1998 can be found in Annex A. We provide a guide to interpreting these survival estimates in the section “Interpreting the survival estimates in this bulletin” .

In 2013, 1-year breast cancer survival in England was 96.7%, increasing from 92.0% for patients in 1998. Figure 3 shows a very tight clustering in survival in 2013 for CCGs around the England average: the difference between the highest survival estimate (98.6% in NHS Kingston CCG) and the lowest (93.2% in NHS South Tyneside CCG) was 5.4 percentage points. 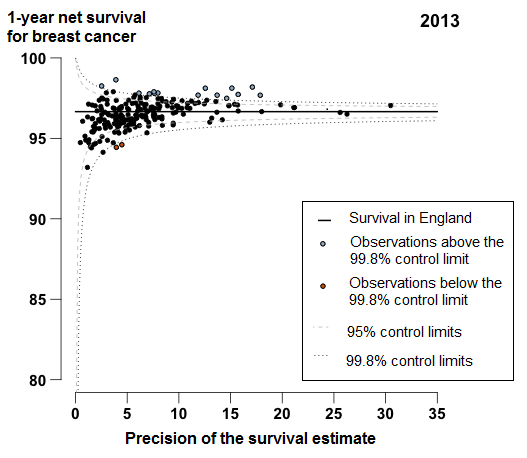 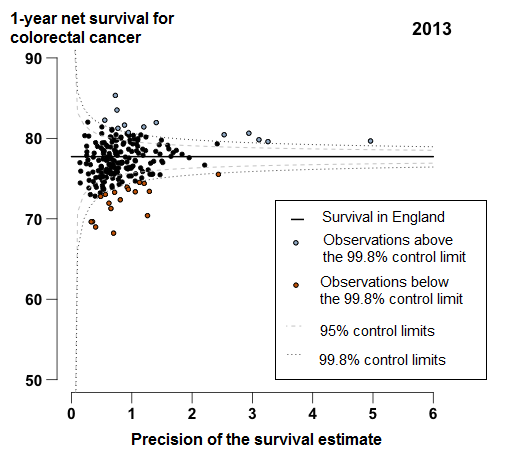 In England, 1-year survival for patients diagnosed with lung cancer increased from 23.1% in 1998 to 35.4% in 2013. For 44 of the 209 CCGs, the 1-year survival estimates were identified as outliers lower than the England average in 2013 (Figure 5); these CCGs were widely scattered around the country, but many (19 out of 44 CCGs) were in the Midlands and East of England. 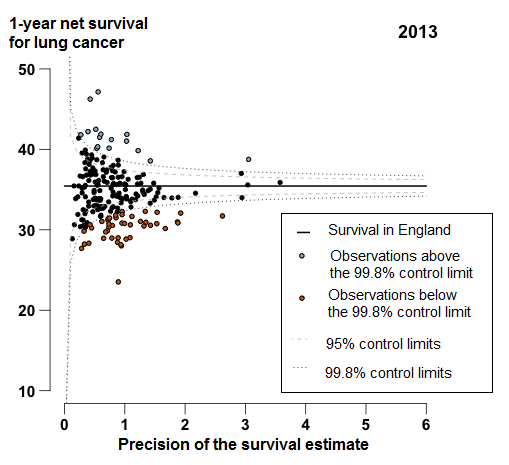 The cancer survival index: what it is

The cancer survival index provides a convenient, single number that summarises the overall pattern of cancer survival in each Clinical Commissioning Group (CCG), for all-cancers combined, for each calendar year. It combines the net survival estimates for each sex, age group and type of cancer (female breast cancer, colorectal cancer and lung cancer separately, and all other cancers combined, prostate cancer being excluded; see Background notes 8 to 10).1

For most cancers, survival is either stable or rising steadily from year to year.2 This trend is reflected in the index. However, the patterns of cancer by age, sex and type of cancer can shift quite quickly over time, especially in small areas. The index provides a summary measure of cancer survival that adjusts for any such shifts – for example, if the population becomes older and/or cancers with low survival come to comprise a higher proportion of all cancers in the CCG.

Points to consider when interpreting these estimates

Funnel plots (see Figure 6) are a useful way to identify outlying observations in cancer survival. The black horizontal line represents the reference level or “target”, for example the level of 1-year survival in England. This is used as the reference level against which “outliers” can be identified. Each data point in the plot represents the survival estimate for a given CCG (vertical scale), plotted against the precision of that estimate (the inverse of the variance; Background note 11 ) on the horizontal scale. Data points that are identified as “outliers” lower (orange (or darker)) or higher (purple (or lighter)) than the England average are below or above the 99.8% control limit. 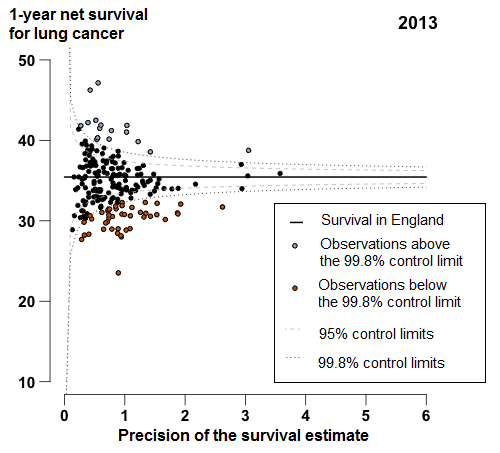 The two “control limits”, in the shape of a funnel around the horizontal line in Figure 6, represent the expected variation in survival around the England national figure, at any given level of precision (the horizontal axis). “Precision” is used to indicate the reliability of the estimate on the funnel plot (95% confidence intervals are also provided in the reference tables). The expected variation is shown as the 95% and 99.8% control limits (2 and 3 standard deviations, respectively), above or below the England average, which are equivalent to 95% and 99.8% confidence intervals.

It should be noted that these “outlier” values are not just the lowest (or highest) values that would be obtained from a simple ranked list. Some of the lowest values of the index are still within the range of variation that could be expected by chance (that is, inside the control limits). These are generally for the smallest CCGs, in which the index has lower precision. The precision estimate (shown on the horizontal axis in Figure 6) reflects the accuracy with which survival is being measured for each CCG. The higher the precision, the more reliable the estimate. Similarly, the smaller the precision, the wider the control limits, reflecting greater variability due to chance. CCGs with a large population will therefore tend to appear toward the right of each funnel plot, and those with small populations on the left, closer to the vertical axis.

Given that a significant gap remains in survival compared with the European average, the Department of Health identified cancer as a specific improvement area for preventing people dying prematurely in the National Strategy (announced in 2011). In 2015 a new 5 year cancer strategy for England was developed by the Independent Cancer Task Force. This sets out recommendations for how the NHS can improve cancer outcomes for patients. The new strategy is being reviewed by Government bodies.

Survival estimates are used to formulate, monitor, and assess health policy and healthcare provision and planning. These estimates feed into the Clinical Commissioning Group (CCG) Indicator Set, which:

“provides clear, comparative information for CCGs, Health and Wellbeing Boards, local authorities, patients and the public about the quality of health services commissioned by CCGs and the associated health outcomes. The indicators are useful for CCGs and Health and Wellbeing Boards in identifying local priorities for quality improvement and to demonstrate progress that local health systems are making on outcomes.”

The CCG indicator set contributes to the National Health Service (NHS) Outcomes Framework, which focuses on measuring health outcomes and includes 1- and 5-year net survival from colorectal, breast and lung cancers. The NHS 5-Year Forward View (2015) set out: “that improvements in outcomes will require action on three fronts: better preventions, swifter access to diagnosis, and better treatment and care for all those diagnosed with cancer”. 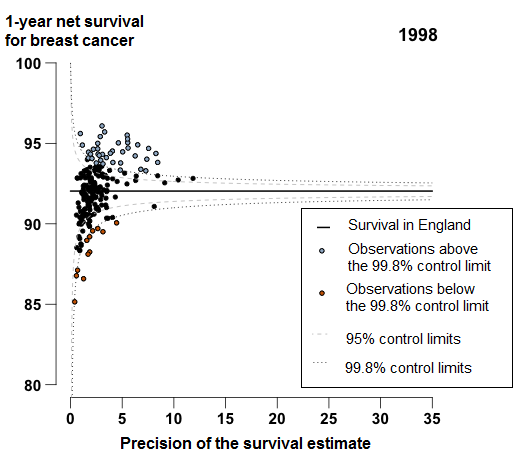 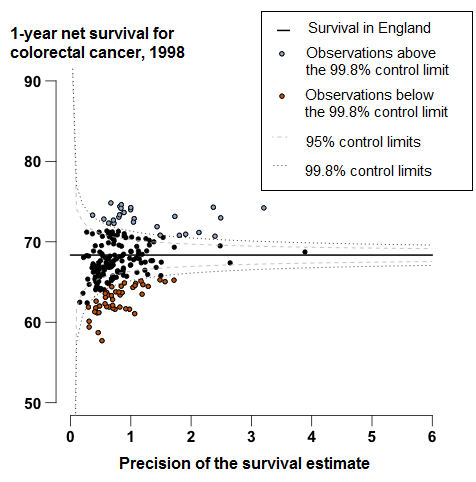 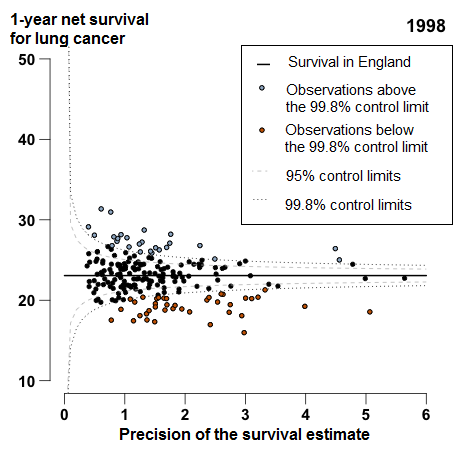 The Cancer Analysis Team at the Office for National Statistics wishes to acknowledge the work of all the staff working in the National Cancer Registration and Analysis Service (NCRAS) in Public Health England, which initially collected and quality assured the cancer data for these analyses. More information about NCRAS is available on the Public Health England website.