Live births, stillbirths, and the intensity of childbearing measured by the total fertility rate.

Over a quarter (27.5%) of live births in 2015 were to mothers born outside the UK, the highest level on record.

“The trend for women to have babies at older ages continued in 2015. Over the last 40 years, the percentage of live births to women aged 35 and over has increased considerably. Women aged 40 and over, now have a higher fertility rate than women aged under 20 - this was last recorded in the 1940s.”

The total fertility rate (TFR) for England and Wales decreased slightly in 2015 to an average of 1.82 children per woman from 1.83 in 2014. The number of births and the TFR in 2015 remain relatively high compared with the last 4 decades. 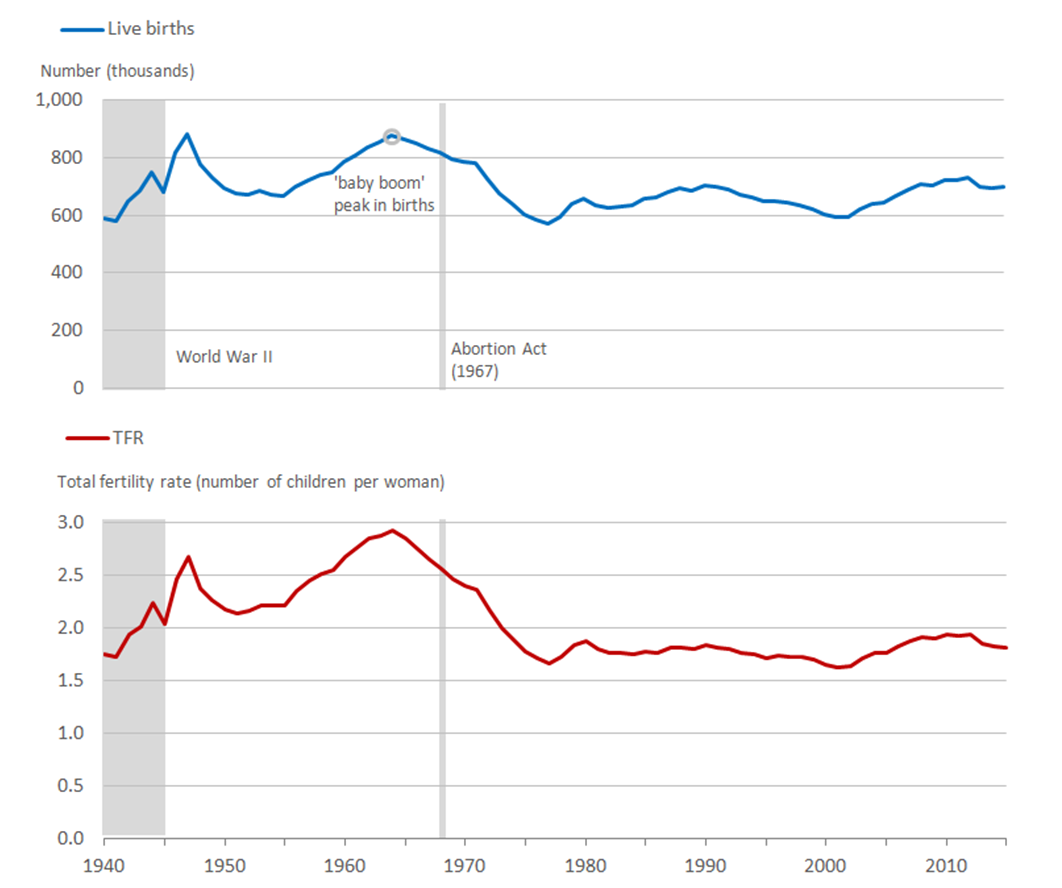 The TFR provides a timely measure of fertility levels; it can be affected by changes in the timing of childbearing, as well as changes in completed family size.

The largest percentage decrease in fertility rates was for women aged under 20 (7.1%); fertility has generally declined for the under 20s since 1999.

In most developed countries, women have been increasingly delaying childbearing to later in life, which has resulted in rising fertility rates among older women. This may be due to a number of factors such as increased female participation in higher education and the labour force, the increasing importance of a career, the rising costs of childbearing, labour market uncertainty and housing factors.

Rising fertility rates at older ages have affected the average age of mother, which has been increasing since 1975, reaching 30.3 years in 2015.

The percentage of live births in England and Wales to mothers born outside the UK continued to rise in 2015, reaching 27.5%; this percentage has increased every year since 1990, when it was 11.6%.

How have local levels of fertility changed since 2001?

Fertility rates can vary considerably between subnational areas for a wide variety of reasons. These include variations in the composition of the population living in each area and social, economic and cultural differences.

More detailed statistics on births and deaths in England and Wales in 2015 are available on our website.

The number of births, birth rates and mean age of mother for the UK and constituent countries can be found in the Vital Statistics: Population and Health Reference tables.

International comparisons of teenage births showed the birth rate for women aged 15 to 19 has been decreasing across Europe since 2004.

Why has the fertility rate risen over the last decade in England and Wales? provides possible reasons for the rising fertility rates recorded between 2001 and 2012.

Further 2015 birth statistics will be published later in 2016; see the GOV.UK release calendar for more details.

Special extracts and tabulations of birth data for England and Wales are available to order (subject to legal frameworks, disclosure control, resources and the ONS charging policy, where appropriate). Enquiries should be made to Vital Statistics Outputs Branch (vsob@ons.gov.uk or telephone: +44 (0)1329 444110). User requested data will be published onto our website.