Trends for the UK (national, regional and local areas) in the average number of years people will live beyond their current age measured by "period life expectancy".

This bulletin presents male and female period life expectancy at birth and at age 65 for the United Kingdom and local areas within the four constituent countries. Figures are presented for the period 2010–12, with those for the periods 2006–08 to 2009–11 for comparison purposes. Information is given about the context, calculation and interpretation of life expectancy figures.

Period life expectancy at a given age for an area is the average number of years a person would live, if he or she experienced the particular area’s age-specific mortality rates for that time period throughout his or her life.

Life expectancy at birth has been used as a measure of the health status of the population of England and Wales since the 1840s. It was employed in some of the earliest reports of the Registrar General to illustrate the differences in mortality experienced by populations in different parts of the country. This tradition of using life expectancy as an indicator of geographic inequalities in health has been continued by ONS since 2001 with the publication of sub-national life expectancy statistics.

More recently, analyses of life expectancy at birth by socioeconomic position (129.1 Kb Pdf) have reported a clear gradient. Boys whose parent(s) had an occupation classified as ‘Higher managers and professionals’, such as directors of major organisations, doctors and lawyers, could be expected to live 5.8 years longer than boys whose parents were classified to ‘Routine’ occupations such as labourers and cleaners (ONS, 2011).

These studies provide a compelling case for monitoring inequalities in life expectancy with a view to narrowing the gap between different areas. As noted by Marmot (2010), reducing health inequalities would benefit society in many ways. There would be economic benefits in reducing losses from illness associated with health inequalities. These currently account for productivity losses, reduced tax revenue, higher welfare payments and increased treatment costs.

Life expectancy figures are widely used by local health planners in monitoring health inequalities and in targeting resources to tackle these inequalities in the most effective manner. They also help to inform policy, planning and research in both public and private sectors in areas such as health, population, pensions and insurance. Key users include the Department of Health and Public Health England, devolved health administrations, local and unitary authorities, and private pensions and insurance companies.

In England, the Department of Health’s Public Health Outcomes Framework, 2013–2016 Healthy lives, healthy people: Improving outcomes and supporting transparency (Department of Health, 2013) sets out its vision for public health, desired outcomes and the indicators that will help in understanding how well public health is being improved and protected. This framework uses the difference in life expectancy and healthy life expectancy between communities as one of two high level outcomes for monitoring population health. Similarly, the NHS Outcomes Framework 2013/14 (Department of Health, 2012) includes an objective to prevent people from dying prematurely. One of the two overarching indicators used to measure and monitor this objective is life expectancy at age 75.

In Wales, life expectancy is used as a high level indicator in the Public Health Strategic Framework - Our Healthy Future (OHF) - to monitor progress against reducing inequities in health.

At an international level, life expectancy is used by the European Community Health Indicators Monitoring (ECHIM) project to monitor health across Europe. In addition, life expectancy at birth, age 45 and age 65, and by socioeconomic status are also used as indicators of access to care (including inequity in access to care) and inequalities in outcomes in the European commission’s policy framework on Social Inclusion and Social Protection.

In each country, the increase in life expectancy was greater for males than for females, causing the difference between the sexes to narrow over time.

In the UK, life expectancy at age 65 was highest in England and lowest in Scotland.

Life expectancy varied across English regions in each period examined and tended to be higher among those in the south than in the north and midlands.

Life expectancy was higher for females than males across all regions in each period examined. In addition, this inequality in life expectancy between the sexes was consistently smaller in the South East and East of England than in any other region.

Life expectancy increased in each region between 2006–08 and 2010–12, with London experiencing the greatest improvement for both males (1.6 years) and females (1.2 years). Improvements in other regions varied between 1.1 and 1.5 years for males and 0.8 and 1.1 years for females.

A number of factors have been identified as plausibly being responsible for the excess mortality, and consequently lower life expectancy, in the northern regions of England. These include socioeconomic, environmental (including working conditions), educational, epigenetic, and lifestyle factors, which may act over the whole life course, and possibly over generations (Hacking, Muller and Buchan, 2011).

One factor that has received less attention is the selective migration of healthy individuals from poorer health areas into better health areas or vice-versa. This type of migration has been shown to play a significant role in increasing or decreasing location-specific illness and mortality rates, which then consequently impact on life expectancy figures. Norman, Boyle and Rees (2005) demonstrated that the largest absolute flow within England and Wales between 1971 and 1991 was of relatively healthy people moving from more deprived into less deprived areas. The impact of this migration was to raise ill-health and mortality rates where these people originated from and lower them in the destination areas. The authors also noted that the benefit to less deprived areas was reinforced by a significant group of people in poor health who moved from less to more deprived locations.

Evidence from the pattern of interregional migration between 1991 and 2010 (ONS, 2013a) also suggests that there might be a selective migration effect at play; there was a higher flow of people into southern regions than out while the reverse was the case in the North East and North West. However, it is not possible to quantify the extent to which better health areas are benefiting from selective migration of healthy people since the health status of these migrants is not known.

In a recent study, Hacking, Muller and Buchan (2011) examined trends in mortality across the north-south divide in England over a period of four decades. In addition to the excess deaths observed in northern regions throughout the period, they also noted that 14% of such deaths in 2004–06 were attributed to the prevalence of smoking while 3.5% in 2005 was associated with alcohol consumption. In addition, death rates for potentially avoidable causes, such as certain cancers, respiratory and heart disease, are significantly higher in northern regions than in the south (ONS, 2013b).

In contrast to at birth, the greatest improvement in life expectancy at age 65 between 2006–08 and 2010–12 was observed in the West Midlands for both sexes.

Gender inequality in life expectancy persists at age 65, albeit to a smaller extent than at birth. In addition, this inequality was smaller in the North East and North West than in other regions.

The local area life expectancy figures presented in this bulletin are based on the current geographical boundaries.

The local areas in the UK with the highest and lowest male and female life expectancy at birth for the periods 2000–02 to 2010–12 are presented in tables 5 and 6 respectively. For the purpose of this bulletin, figures are only presented for the top and bottom ten ranked local areas.

In 2010–12, male life expectancy at birth was highest in East Dorset (82.9 years) and lowest in Glasgow City (72.6 years). For females, life expectancy at birth was highest in Purbeck at 86.6 years and lowest in Glasgow City where females could expect to live for 78.5 years. These differences were statistically significant. It is noteworthy that these areas may not always be ranked top and bottom respectively in the UK. Therefore, the change in geographical inequality in life expectancy is not necessarily a measure of the change in the gap between specific areas over time. Nevertheless, Glasgow City was consistently ranked as the area with the lowest male and female life expectancy between 2000–02 and 2010–12.

The distribution of male and female life expectancy at birth by local areas in the UK for 2010–12 can be found in maps 1 and 2 respectively below. 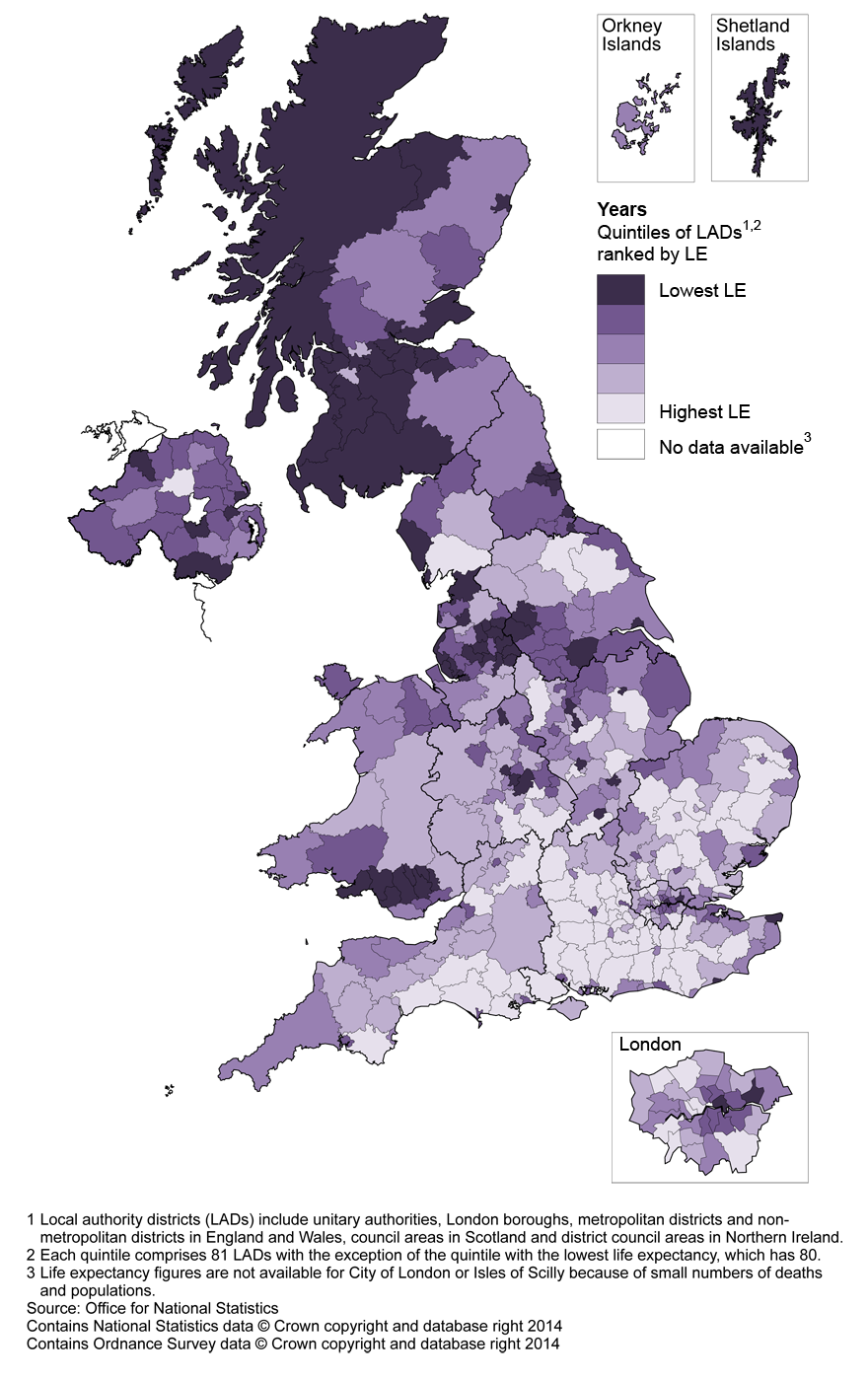 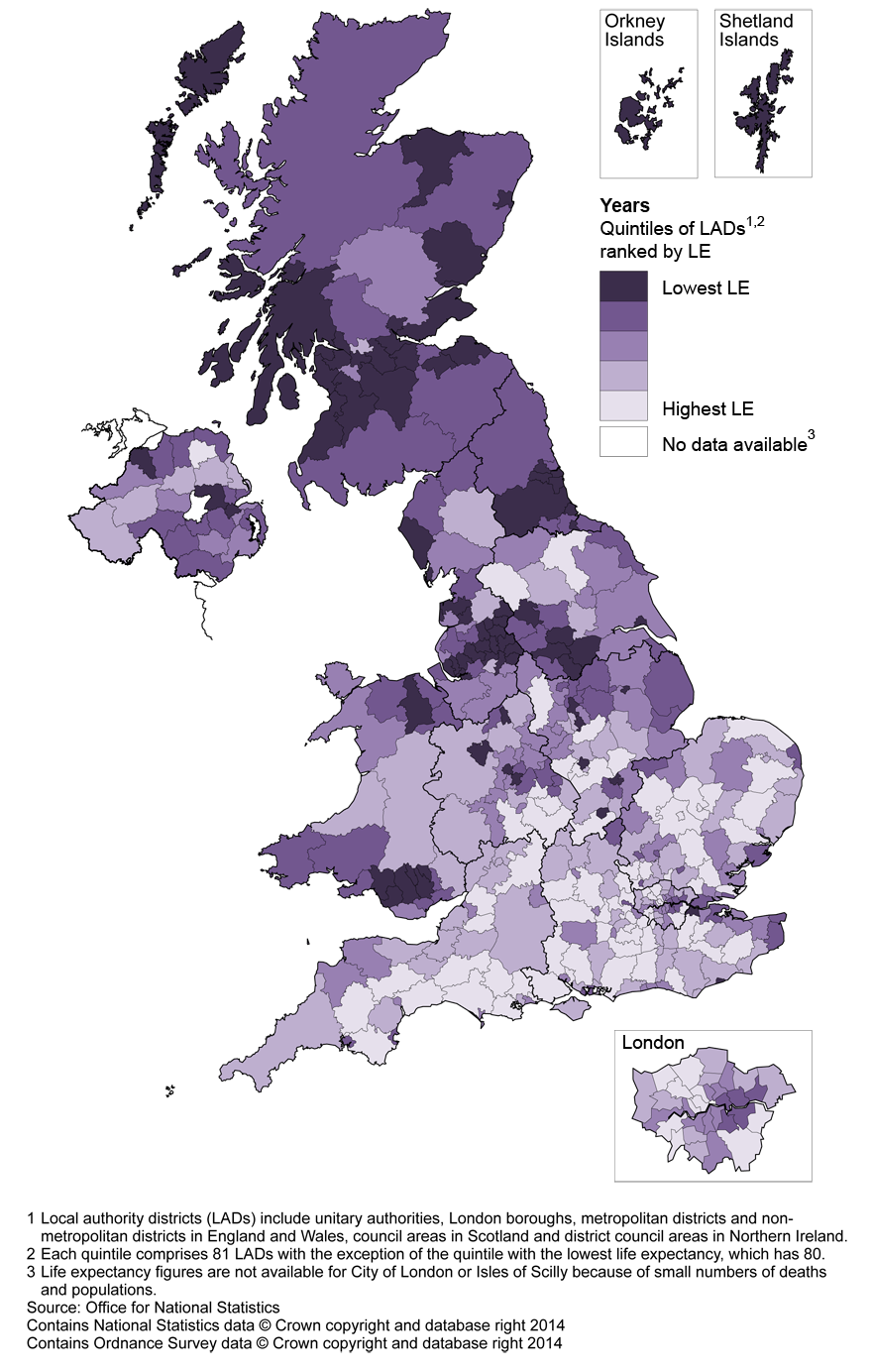 For women at this age, life expectancy was highest in Camden (23.8 years) and lowest in Glasgow City (18.3 years). These differences were statistically significant.

While national estimates of life expectancy provide a snapshot of the mortality experience of a whole population, they do not reveal the heterogeneity of experience within it. As such, favourable averages at national level or even at regional level may be disproportionately influenced by extremes of mortality experience within these areas. As observed from these figures, the inequality in life expectancy becomes more pronounced as the geographical level of analysis becomes more refined.

The distribution of male and female life expectancy at age 65 by local areas in the UK for 2010–12 can be found in maps 3 and 4 respectively below. 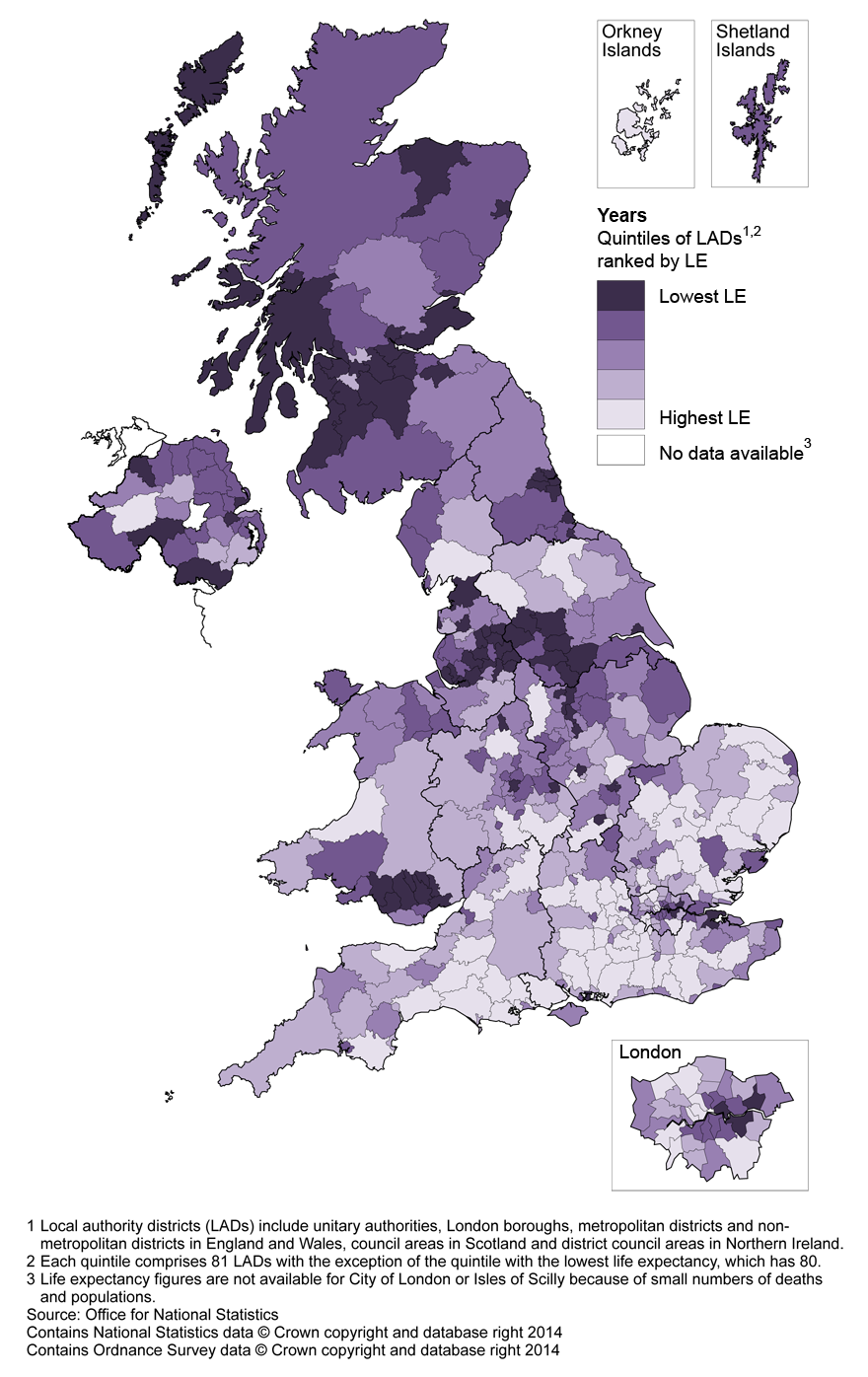 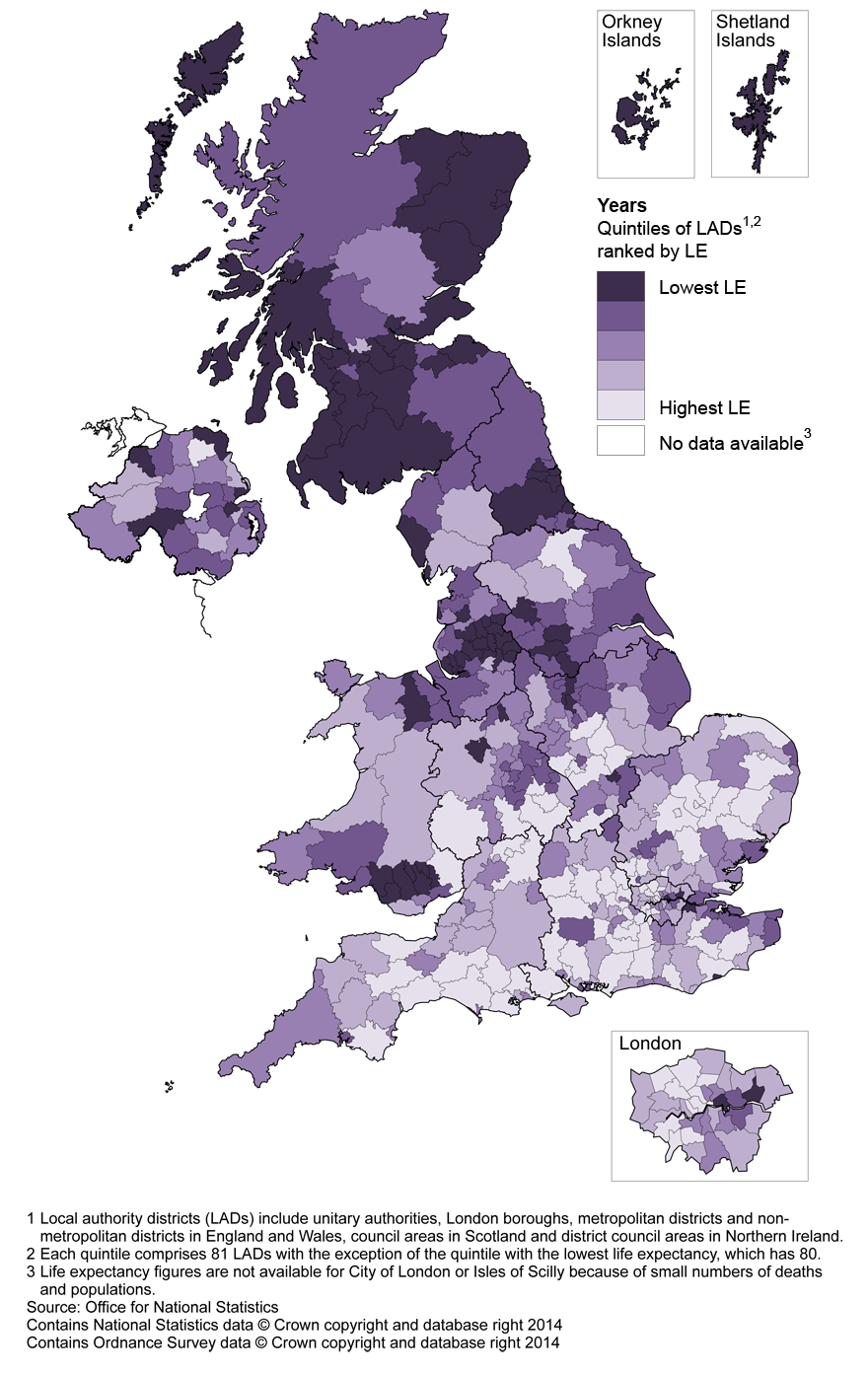 Life expectancy at birth and at age results for 2000–02 to 2010–12 have been published as a set of interactive animated maps to show the change in life expectancy at local area level over time.

The life expectancy results presented in this bulletin and additional results from 1991–93 can be found – presented with 95 per cent confidence intervals – in the following reference tables:

Abridged life tables (based on five-year age groups) were constructed using standard methods (Shyrock and Siegel, 1976; Newell, 1994). Separate tables were constructed for males and females using numbers of deaths registered in calendar years and annual mid-year population estimates. A life table template (192.5 Kb Excel sheet) which illustrates the method used to calculate life expectancy (and 95% confidence intervals) for this bulletin, including a description of the notation, can be found on the ONS website.

The 95 per cent confidence interval (CI) for each area was calculated using the revised Chiang method (Chiang II), allowing the calculation of the variance of the mortality rates for those age groups with no deaths registered in the analysis period. This method is the approved standard for ONS outputs of life expectancy at sub-national level (Toson and Baker, 2003 (288.1 Kb Pdf)).

All figures presented in this bulletin are period life expectancies. Period expectation of life at a given age for an area in a given time period is an estimate of the average number of years a person of that age would survive if he or she experienced the particular area’s age-specific mortality rates for that time period throughout the rest of his or her life. The figure reflects mortality among those living in the area in each time period, rather than mortality among those born in each area. It is not therefore the number of years a person in the area in each time period could actually expect to live, both because the death rates of the area are likely to change in the future and because many of those in the area may live elsewhere for at least some part of their lives.

Further information on period and cohort life expectancies can be found on the ONS website.

Cohort life expectancies are calculated using age-specific mortality rates which allow for known or projected changes in mortality in later years and are therefore regarded as a more appropriate measure of how long a person of a given age would be expected to live, on average, than period life expectancy.

Period life expectancies are a useful measure of mortality rates actually experienced over a given period and, for past years, provide an objective means of comparison of the trends in mortality over time, between areas of a country and with other countries. Official life tables in the UK and in other countries that relate to past years are generally period life tables for these reasons. Cohort life expectancies, even for past years, usually require projected mortality rates for their calculation and so, in such cases, involve an element of subjectivity.

Further information on period and cohort life expectancies can be found on the ONS website.