The impact of the First World War on the 90 and over population of the UK: 2015

The impact of birth patterns around the time of the First World War and the influence of the Spanish 'flu' pandemic that followed on the size and make up of today's population aged 90 and over.

In 2015, there were estimated to be over half a million (556,270) people aged 90 and over living in the UK. The size of this age group relative to the rest of the population has been gradually increasing over time and they now account for just under 1% of the total UK population. 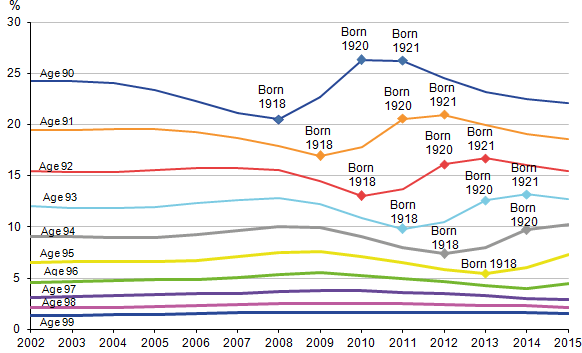 In 2015, the vast majority (71%) of people aged 90 and over in the UK were female. Women outnumber men at these ages because they have higher life expectancies. Figure 3 shows the number of women aged 90 and over for every 100 men of those ages, from 1981 to 2015. This ratio decreased from 396 women in 1981 to 240 women in 2015 per 100 men aged 90 and over. Although male mortality at older ages improved faster than female mortality over the whole of the period shown, the fall in the ratio of women to men at ages 90 and over is only apparent from 1990; prior to this time the ratio is rising.

The rises in the number of women aged 90 and over relative to men in the 1980s reflect 2 major past events, the First World War and the Spanish “flu” pandemic that followed. Men who would have reached age 90 at the beginning of the period shown in Figure 3 (1981 to 1986), would have been aged 18 or over at the outbreak of the First World War in 1914 and therefore eligible to enlist. Those who would have reached age 90 in the period 1987 to 1990 would have been too young to enlist when war broke out, however they would progressively have turned 18 and therefore been eligible to join-up between 1915 and 1918 when the war ended (also it is known that many boys younger than 18 volunteered and their age not checked)2. Many of these men would have died as a result of the war, reducing the size of these cohorts at older ages.

The global influenza pandemic that occurred after the War in 1918 to 1919, unlike other strains of “flu”, tended to attack young adults as well as younger and older age groups3. Young men were disproportionately susceptible compared to young women because many had already been weakened by fighting in the First World War.

Together, these 2 major events contribute to the rises in women relative to men at age 90 and over in the 1980s and at age 100 and over in the 1990s (despite greater improvement in male mortality compared to female mortality at older ages over the whole period) as fewer men were alive to reach the oldest ages. After this time the ratio of women to men at older ages starts to fall.