How UK regions and countries vary in performance on economic and wellbeing indicators, and how this trend has changed over time.

Typically the economy is considered at an aggregate level to judge the economic experience of individuals within a country. While aggregate measures like gross domestic product (GDP) provide valuable insights, they often mask the disparities between the experience of individuals living in different regions and countries of the UK. In this respect regional indicators give us more insight. Within the UK, Nomenclature of Territorial Units for Statistics (NUTS) areas and local administrative units (LAUs) can be used to identify regions and countries of the UK at a different level of detail.

In this article, we look at the regional picture for the UK at the NUTS 1 level¹, to give an understanding of how UK regions and countries vary in economic performance with respect to each other, and how this trend has changed over time. There is also an interactive tool for users to look at some personal well-being indicators such as life satisfaction, feeling worthwhile, happiness, and anxiety at a local area level.

With the government focusing on addressing regional disparities, such analysis is useful for identifying the lagging regions and countries. This analysis is valuable in helping us understand the economic and social experiences of the individuals living in different parts of the UK, and can ultimately help reduce the disparities within and between regions and countries.

The macroeconomic variables we will consider are:

London is by far the most productive and best-paid region

This positive correlation can also be explained by the efficiency wage hypothesis. This hypothesis claims that firms will offer a wage greater than that of the labour market clearing wage to incentivise workers to increase their labour productivity. One potential driver for output per hour is capital investment. When considering the neoclassical production function, a greater stock of capital will increase the marginal productivity of labour, all else being equal. In practice, the relationship between productivity and wages is less straightforward.

Figure 1: Productivity and earnings are the highest in London and the South East

Download this chart Figure 1: Productivity and earnings are the highest in London and the South East

London and the South East were the top performers for output per hour and median hourly earnings.

Figure 2: The gap between the regions and countries for productivity and wages has remained steady over time

Human capital is defined as the stock of skills, knowledge and experience of an individual or population, which can productively be applied in the economy; it is widely referred to as one of the main drivers of economic growth. The methodology for calculating human capital can be found in the Human capital estimates, UK: 2004 to 2018 release. We are in the process of expanding our measure of human capital following the consultation launched in September 2019.

Figure 3: London has the highest real human capital per head for all years between 2004 and 2018

Download this chart Figure 3: London has the highest real human capital per head for all years between 2004 and 2018

London and the South East have the highest human capital per head compared with all other regions and countries of the UK. Given that the UK’s high-skill service industries, such as financial services and technology, are concentrated in London, it attracts both domestic and international skilled labour to the region. As skilled labour is mobile, it is likely that people with a higher stock of human capital relocate to regions and countries that pay more and have better job opportunities. Over time, real human capital per head has generally increased for each NUTS1 region.

Figure 4: London had the greatest stock of real human capital per head for degree holders for all years between 2004 and 2018

Download this chart Figure 4: London had the greatest stock of real human capital per head for degree holders for all years between 2004 and 2018

London also has the highest real human capital per head estimate for people with a degree or equivalent qualification. The real human capital per head estimate for these individuals was lower in 2018 compared with 2004 for all regions and countries of UK. The differences across regions and countries in Figures 3 and 4 may be partially attributed to differences in the population composition, such as the average age of the economically active population in each region and country, and the amount of occupational mismatch for those with differing qualifications.

Regions and countries with higher household income are also likely to have a higher household consumption³. This positive relationship is well established within economic theory, represented for example, by the Keynesian consumption function (Keynes, 1936)⁴. However, if the households in a certain region experience a higher cost of living, their residual income after housing costs will reduce, despite the higher income.

While London ranks top in performance of macroeconomic variables such as productivity, wages and human capital, the residents pay a higher proportion of their household income on housing costs. Between financial years ending (FYE) 2015 and 2017, housing costs (as measured by the median household weekly private rent) accounted for 43% of median weekly equivalised household income in London, compared with 21% in Northern Ireland.

Source: Department for Work and Pensions

Some other things to note are:

The fall in median household weekly private rent in London between FYE 2017 and FYE 2016 could be partly explained by a steady fall in the growth in the House Price Index (HPI) and the Index of Private Housing Rental Prices (IPHRP) during this period. The volume of sales also declined during this period, partly the result of changes in stamp duty introduced in April 2016, and a slowdown in the buy-to-let market. For more details on the London housing market please see the Exploring recent trends in the London housing market article.

London is no longer the region with the highest household income, once housing costs are considered

The Department for Work and Pensions (DWP) publishes the Households below average income release. This contains information on equivalised disposable household income adjusted for household size and composition (called equivalisation), estimated on both a before and after housing costs basis. A better way to look at the difference in income between regions and countries is to use this equivalised household income and compare estimates both before and after housing costs.

The difference between household income before and after housing costs has worsened for London between FYE 2009 to FYE 2011 and FYE 2016 to FYE 2018. An increase in housing costs can be partially explained by a shortage of housing supply relative to the demand. This shortage was much greater in London and the South East resulting in higher housing costs in these regions. Despite growth in the amount of homes supplied (PDF, 1.49MB) in recent years, housing demand has remained strong and continued to outstrip housing supply in these regions.

Figure 6: London is only slightly above the UK average household income after considering housing costs 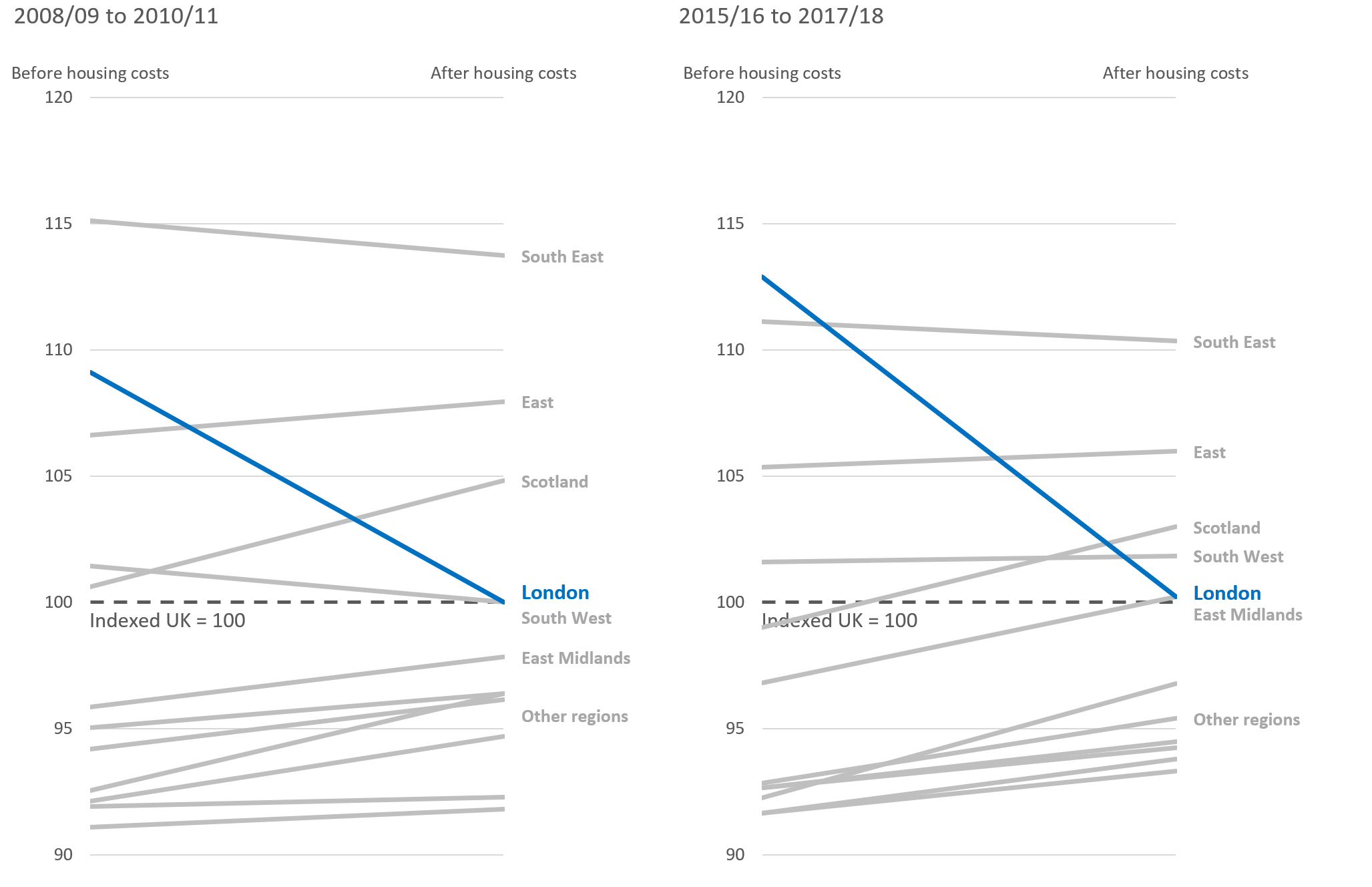 Source: Department for Work and Pensions

Download this image Figure 6: London is only slightly above the UK average household income after considering housing costs

This analysis does not include commuting costs. Both housing and commuting costs are important for the South East as London is a big employment centre for the region.

The Wealth and Assets Survey calculates the total wealth in Great Britain, which can shed some light on the wealth inequality within the different regions and countries. Data for Northern Ireland is unavailable, so the analysis focuses on Great Britain. Aggregate total net wealth is an estimate of the value of wealth held by all private households in Great Britain, including net property, net financial, private pension and physical wealth.

One thing to note is that the Gini coefficient does not reveal the source of inequality. Many factors, including demographic variations by region, can result in higher inequality. Other things to note in Figure 7 are:

Figure 7: London is the most unequal region in terms of wealth inequality

While London outperformed other NUTS1 regions of the UK in terms of macroeconomic variables such as productivity, human capital, and wages, once housing costs are considered, and looking at socio-economic variables like wealth inequality, London underperforms.

Our personal well-being explorer tool in Figure 8 allows you to observe well-being in one local area and compare it with other areas. Some of the most insightful comparisons may relate to how specific areas have progressed over time. For more information on well-being please see the Personal and economic well-being in the UK: February 2020 bulletin.

It is possible to rank local authorities based on their average scores alone but this may be misleading for various reasons, such as different sample sizes, different confidence intervals and mode effects, and not comparing like with like (for example, we know that people in rural areas tend to rate their well-being more highly than people in urban areas). Comparisons between areas should be made with caution.