As with many cross-border economic statistics, UK foreign direct investment (FDI) values fluctuate in response to currency movements, as the value of assets and earnings denominated in foreign currencies are converted into sterling. UK investments in overseas companies (FDI assets) are more likely to be denominated in foreign currency compared to overseas investors’ investments in the UK (FDI liabilities); therefore, UK FDI assets will experience larger revaluations in response to fluctuates in sterling.

The value of UK FDI assets rose by £65 billion to over £1,416 billion between Quarter 1 (Jan to Mar) 2016 and Quarter 2 (Apr to June) 2016. This increase coincided with a period where the sterling exchange rate experienced a sharp depreciation following the EU referendum result on 23 June 2016; the sterling effective exchange rate – a weighted average index of the UK’s currency relative to a basket of major currencies – fell by 8.8% between 22 June and 27 June.

The depreciation in sterling raised questions on the impact on the UK’s Balance of Payments statistics. Broadly, a fall in the domestic exchange rate is expected to improve a number of accounts in the Balance of Payments, including the international investment position, as the value of overseas assets that are denominated in foreign currencies increase when converted into sterling. The impact on the trade balance – another important component of the current account balance – is less clear. All else equal, the trade balance may initially worsen as the value of exports fall and imports rise. However, over the longer term, demand for imports (exports) may decline (rise) as relative prices change. Secondary effects, such as increased investment into the UK due to relative competitiveness, should also be considered; however, these are beyond the scope of this short note.

As asset and liability values are measured at the period end, the depreciation in sterling in the final few days of Quarter 2 2016 will have impacted on the UK’s international investment position for Quarter 2 2016. In contrast, the impact on earnings is likely to be less immediate, as only earnings in the final 7 days of the quarter are affected; although, should the sterling exchange rate remain at current levels, earnings in future quarters will be affected, all else being equal.

Figure 1 presents recent percentage changes in the pound’s effective exchange rate that have impacted statistics published in the Balance of Payments for Quarter 2 2016. While sterling fell by as much as 8.8% in a short period of time in June, the change between the end of Quarter 1 and Quarter 2 2016 was 5.1%. Therefore, while statistics such as FDI positions will be affected by the depreciation, the impact will be to a lesser extent than headline quarterly average currency movements suggest.

The lower decline in the exchange rate between the quarters is due to the increases in the exchange rate in the days leading up to the referendum. As shown in Figure 2, the UK’s exchange rate followed a broadly downward path between the start of 2016 to April 2016, before experiencing increases in the run up to the referendum. Therefore, FDI assets are expected to have come under upward pressure during both quarters of 2016 (Quarter 1 and Quarter 2).

As a proportion of equity and debt held by UK companies overseas is denominated in foreign currency, an inverse relationship between the value of foreign direct investment (FDI) assets and currency movements is expected. A negative relationship is also expected between the value of FDI liabilities and currency movements; however, the proportion of stocks and debt held in the UK by overseas investors is expected to be smaller than assets.

Analysis of FDI assets and currency movements shows a statistically significant negative relationship between the 2 series, where regression modelling based on quarterly changes in each series1 suggests that the value of FDI assets increase (or decrease) by an average of 0.5% in response to a 1.0% decrease (or increase) in the sterling effective exchange rate. Therefore, if FDI assets were worth £1,000 billion, and sterling depreciated by 1.0%, FDI assets would be expected to increase by approximately £50 billion if all other factors remained constant. In reality, there are a multitude of factors that can offset the effects of currency fluctuations.

Similar analysis of FDI liabilities reported no significant relationship with currency fluctuations, which may reflect the small proportion of UK-based investments from overseas that are denominated in foreign currencies.

Although the number of effects captured in the other gains and losses question makes the series volatile, the results can be used to determine whether there have been any recent developments. The number of non-zero respondents to the other gains and losses question was approximately 2,000 in Quarter 2 2016, slightly below the 2,100 average over the 5 previous quarters. The number of positive responses to the question does indeed show a spike in Quarter 1 and Quarter 2 2016, coinciding with the fall in sterling during these periods.

Figure 3: Responses to the non-transactional effects question on the FDI survey, Quarter 1 (Jan to Mar) 2015 to Quarter 2 (Apr to June) 2016 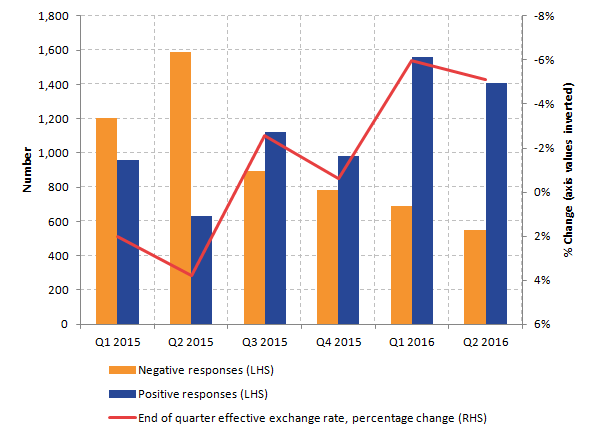 Download this image Figure 3: Responses to the non-transactional effects question on the FDI survey, Quarter 1 (Jan to Mar) 2015 to Quarter 2 (Apr to June) 2016

Looking at the values returned also shows a clear increase in other gains and losses values in Quarter 2 2016, with a £33 billion positive contribution to the value of FDI assets. Although there was a fall in the overall value of non-transactional effects in Quarter 1 2016, this was largely due to a number of large negative respondents unrelated to currency movements who more than offset the returned values of positive respondents.

Figure 4: Changes to FDI asset positions due to non-transactional effects

Download this chart Figure 4: Changes to FDI asset positions due to non-transactional effects

Notes for How the impact of currency fluctuations are recorded in FDI section:

As outlined in this short note, foreign direct investment (FDI) assets are expected to be directly affected by currency fluctuations such as the recent depreciations in sterling, while FDI liabilities are also affected but to a lesser extent. The depreciation in sterling shortly after the EU referendum coincided with increases in the number of positive respondents to the other gains and losses question on the FDI survey, which contributed £33 billion to the £65 billion increase in FDI assets in Quarter 2 2016. While the number of positive responses in Quarter 1 2015 also increased, these values were more than offset by a number of large negative responses that were related to other non-transactional effects.