This release provides estimates of R&D performed in, and funded by, the following four sectors of the UK economy, as defined in the Frascati Manual 2015:

In this statistical bulletin, R&D and related concepts follow internationally agreed standards defined by the Organisation for Economic Co-operation and Development (OECD), as published in the Frascati Manual 2015. GERD is the OECD’s preferred measure of R&D activity for use in international comparisons.

This release reports on R&D expenditure in the UK irrespective of the country of residence of the ultimate owner or users of the R&D produced.

Performance is regarded as a more accurate measure than funding received by an organisation, as not all funds received may be used on R&D as intended.

All figures quoted are in current prices unless otherwise stated.

Constant price comparisons in this release have been made using data from 1990. However, some constant price estimates are available in previous releases for earlier periods.

The UK Government’s Industrial Strategy includes a target to raise investment on R&D to 2.4% of gross domestic product (GDP) by 2027. UK R&D statistics are used to assess how sectors of the economy are contributing towards reaching this policy goal.

The business sector is the largest component of GERD, and the estimates in this release are derived from the Business enterprise research and development, UK: 2018 statistical bulletin, released 21 November 2019. The business sector accounted for 1.2% of GDP in 2018.

In previous GERD publications, estimates were available for research councils as a distinct element in the overall government sector. In this release, separate estimates for the research councils are no longer available as these now form part of the UKRI sector. In 2018, UKRI was created to bring together the UK’s seven research councils, Innovate UK and Research England into one unified body. Research England, the new council within UKRI, has taken over some functions of the former Higher Education Funding Council for England (HEFCE). The category for “research councils” has therefore been replaced by “UKRI” in the data tables that form part of this release.

In this release, Research England is still included with the higher education funding councils (HEFCs) for Scotland, Wales and the Department for Employment and Learning in Northern Ireland, to give one overall UK sector for the HEFCs.

When making comparisons between 2018 estimates for UKRI and research councils in previous years, it should be noted that UKRI now includes Innovate UK, which was previously part of the Department for Business, Energy and Industrial Strategy (BEIS) and therefore the government department total.

A regional breakdown of expenditure for the higher education sector is not available at the time of the publication of this release. Therefore, the datasets containing the full regional breakdown for countries and regions of the UK, by R&D sectors, that usually form part of the GERD release will be updated on the website at a later date.

In constant prices (that is, adjusted to remove the effects of inflation), the 2018 estimate surpassed 2017’s previous high by £1.6 billion, an increase of 4.6%. With an average annual growth rate of 2.0% since the 1990 level of £21.0 billion, the long-term upward trend, in constant prices, is still evident (Figure 1).

UK gross domestic expenditure on research and development, 1990 to 2018

Download this chart Figure 1: Expenditure on R&D performed in the UK was £37.1 billion in 2018

Figure 2: UK's research and development as a percentage of GDP was 1.71%

UK gross expenditure on research and development as a percentage of gross domestic product, 1990 to 2018

Download this chart Figure 2: UK's research and development as a percentage of GDP was 1.71%

Figure 3: Business enterprise sector had the largest expenditure on research and development performed in the UK in 2018

Composition of UK gross domestic expenditure on research and development by performing sector, 2018

Download this chart Figure 3: Business enterprise sector had the largest expenditure on research and development performed in the UK in 2018

Annually, the 400 largest BERD performers are asked to select the industry product groups that best describe the type of R&D they undertake. For smaller R&D performers, no product group data are collected; however, the dominant Standard Industrial Classification (SIC) of these businesses is used as a proxy to determine product group. The concept of “product groups” is described in more detail in the UK Business Enterprise Research and Development Survey QMI.

The product groups with the largest R&D expenditure in 2018 were:

The funding for this sector was provided by UK Research and Innovation (UKRI), Research England, the higher education funding councils (HEFCs) for Scotland, Wales and the Department for Employment and Learning in Northern Ireland.

In 2018, UKRI was created to bring together the seven research councils, Innovate UK and some functions of the former Higher Education Funding Council for England (HEFCE) into one unified body. Its functions in relation to allocation of research funds in the higher education sector will be continued by Research England, the new council within UKRI.

Research England and the HEFCs are responsible for the distribution of funding for higher education to universities and further education colleges throughout the UK. HEFCs and Research England are funded by the government; however, being non-departmental public bodies, they are deemed not part of any government department. For the purposes of reporting R&D funding, the HEFCs (while ultimately government funded) are classified separately from the rest of government.

The UK Government owns many research institutes and laboratories that carry out R&D. These are managed by various government departments, including the Department for Business, Energy and Industrial Strategy (BEIS), the Department for Environment, Food and Rural Affairs (Defra), and the Department of Health and Social Care (DHSC).

As of April 2018, research councils ceased to report separately and were brought together with Innovate UK (formerly part of the BEIS) and Research England to form UKRI. However, for the purposes of the estimates in this release, Research England is still grouped with the other HEFCs to give UK totals.

UKRI R&D expenditure (excluding Research England) grew by 11.1% from £866 million reported by the seven research councils in 2017 to £962 million in 2018. This jump is in part a result of the new reporting structure established in 2018, which is inclusive of Innovate UK.

The PNPs sector is the smallest R&D-performing sector in the UK. It includes registered charities and trusts mainly specialising in health and medical research and development. This sector includes, for example, several cancer charities that carry out extensive research, from cancer prevention to drug development and clinical trials.

In 2018, PNPRD was £0.8 billion, up 9.2% from 2017. This contributed 2% to total UK-performed R&D expenditure, its proportion remaining unchanged from 2017. It should be noted that from 2011, the PNP survey has been biennial and therefore non-survey years are estimated using data from survey years.

In Figure 4, the flows from left to right show the value of funds that organisations within each of the sectors of the UK economy provided to other sectors and to organisations within their own sector. This is to highlight the complex nature of how R&D performed in the UK is funded. Funding from overseas is also shown to complete the picture. Values of each sector on the right of the chart are the amounts that each sector spends on performing R&D, which comprises funds from all other sectors.

The total government sector is subdivided into two elements: government departments and UKRI; and higher education funding councils (HEFCs) including Research England. In the government sector, HEFCs primarily provide funds to higher education institutes (HEIs) for them to perform R&D. This contrasts with government departments and UKRI, which receive funds from other sectors as well as partly fund themselves to perform R&D, yet they also provide substantial funds to other sectors.

Figure 4: Flows of research and development funding in the UK in 2018

The proportions of each sector’s funding of UK R&D expenditure has fluctuated over time. In 1990, R&D funding from business enterprise accounted for 50% of the UK total. While its share has remained the largest, its share has also varied over time with a low of 42% in 2003 rising to 55% in 2018. While business enterprise had the largest growth in value terms since 1990, R&D funding from overseas had the largest annual average growth at 2.5% compared with the business enterprise sector at 2.4%. In constant prices, overseas R&D funding was £2.5 billion in 1990; this is 12% of total UK funding. Despite fluctuations, there was a long-term upward trend in the value of funding from overseas. This peaked at £5.9 billion in 2014, representing 18% of total UK funding. However, since then overseas funding has declined, falling by 14.4% to £5.1 billion in 2018; this is 14% of the UK total.

Figure 5 shows the breakdown of UK gross domestic expenditure on R&D (GERD) by funding sector since 2013.

Figure 5: Business enterprise sector remained the largest funder of R&D in the UK

Composition of UK gross domestic expenditure on research and development by funding sector in constant prices, 2013 to 2018

Download this chart Figure 5: Business enterprise sector remained the largest funder of R&D in the UK

Business enterprise expenditure on performing R&D (BERD) in the defence sector has fallen by 46.4% since 1990 in constant price terms to £1.7 billion in 2018, accounting for 88% of the UK defence total. In contrast, over the same period BERD on civil projects grew by 106.2% to £23.4 billion (66% of the UK civil total). The business enterprise sector remains by far the largest performer of both civil and defence R&D.

The Europe 2020 targets specify five targets for the EU to achieve by 2020, including a target of 3% of the EU’s gross domestic product (GDP) to be invested in research and development (R&D). The latest Preliminary estimates produced by Eurostat indicate that for the EU as a whole, the percentage of GDP spent on R&D fluctuated between 1.74% in 2005 and 2.12% in 2018 (Figure 6). Please note that the 2018 results for the EU-28 and Organisation for Economic Co-operation and Development (OECD) countries are early estimates and are provisional at the time of this release.

Figure 6: UK had the 11th highest R&D as a percentage of GPD of all EU-28 countries 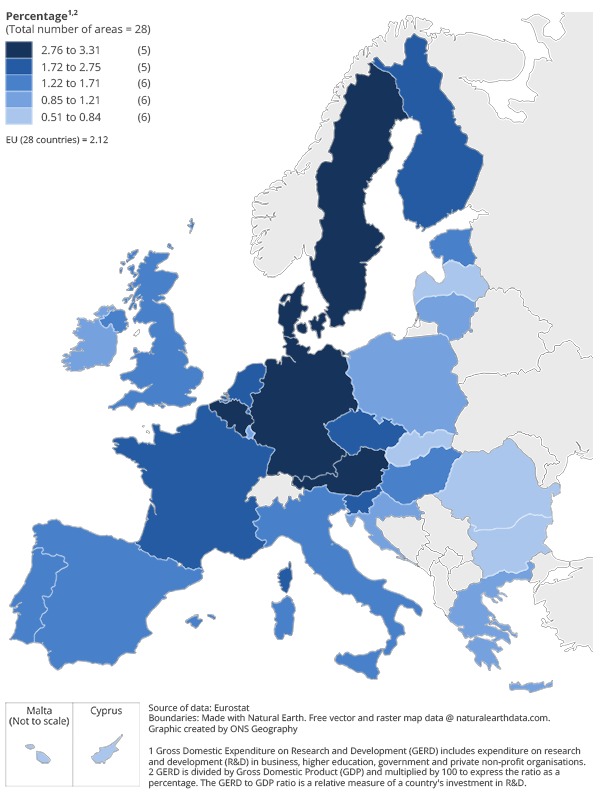 Download this image Figure 6: UK had the 11th highest R&D as a percentage of GPD of all EU-28 countries

Figure 7 shows the UK’s R&D as a proportion of GDP compared with other EU countries.

Figure 7: UK’s GERD was the 11th largest percentage of GDP of all EU 28

Download this chart Figure 7: UK’s GERD was the 11th largest percentage of GDP of all EU 28

This release includes data tables (LF1 and LF2) on qualified scientists and engineers in the labour force by gender. These estimates are from our Labour Force Survey (LFS) and are categorised by type of qualification and occupation from the population of Great Britain aged 16 to 64 years. Occupation is based on the Standard Occupational Classification 2010 (SOC 2010). Prior to 2015, this information was published in the UK government expenditure on science, engineering and technology statistical bulletin. However, these data are more relevant in the context of gross domestic expenditure on R&D (GERD) and can be made accessible at an earlier date.

Further statistics on R&D expenditure in the UK are available.

When examining this bulletin or the data tables, please note:

More quality and methodology information on strengths, limitations, appropriate uses, and how the data were created is available in the UK gross domestic expenditure on research and development QMI.

The collection of the data contained in this statistical bulletin has not been affected by the coronavirus (COVID-19) outbreak.

Our latest data and analysis on the impact of COVID-19 on the UK economy and population is now available on a new web page. This will be the hub for all special virus-related publications, drawing on all available data.

The Office for National Statistics (ONS) has released a public statement on COVID-19 and the production of statistics. Specific queries must be directed to the Media Relations Office.