An overview of new and experimental estimates of labour productivity at the 2-digit SIC industry level for the UK along with some initial analysis demonstrating trends in the data.

This note introduces these experimental data. It provides some initial analysis demonstrating trends in the data and explains some of their advantages and disadvantages. Section 2 outlines the methodology that we use to estimate these series. Section 3 presents some of the main findings from these data.

As with all of our productivity outputs, we welcome user views on the possible uses and usefulness of these data. This is particularly relevant for these experimental series. These should be directed to our inbox: Productivity@ons.gov.uk. Subject to user feedback, it is our intention to publish these more detailed industry labour productivity metrics on a quarterly basis in the future.

Labour productivity estimates are derived by dividing measures of “output” by a measure of labour “input”. Most of the output measures used in the labour productivity statistical outputs are taken directly from the UK National Accounts and are measures of real (inflation-adjusted) gross value added (GVA), for the whole economy, industries and sub-industries of the economy.

Labour input can be measured in a number of different ways, including the number of workers, jobs or hours worked. This release uses our preferred measure of labour input – hours worked – to provide estimates of output per hour worked. This measure of labour input is calculated by estimating the number of jobs in a given industry and multiplying these by estimates of average hours worked per job in that same industry. Jobs estimates are primarily derived from several sources: employee jobs are taken from the Short-Term Employment Survey, the Business Register Employment Survey and Public Sector Employment; self-employed jobs are derived from Labour Force Survey (LFS) datasets; Her Majesty’s Forces (HMF) jobs come from the Ministry of Defence; Government-Supported Trainee jobs are derived from LFS datasets, as are Unpaid Family Worker jobs. Average hours data are derived solely from the LFS (excluding HMF). Finally, the aggregate of industry-level estimates of hours worked are constrained to non-seasonally adjusted whole-economy hours worked (as published in Labour Market Statistics), seasonally adjusted and constrained again to seasonally-adjusted whole-economy hours worked1.

This methodology reflects that used in the calculation of Labour Productivity National Statistics, but as these lower-level estimates are experimental they should be treated with care. In particular, the granularity of the data means individual series can be volatile relative to the movement of higher level industries. We recommend that users focus on long-term trends in these series and avoid concentration on specific quarterly movements. Data are presented quarterly to enable users who wish to utilise the granularity of this breakdown in their analyses, for example, to better understand the effect of industry composition on aggregate labour productivity movements. In this first release, these detailed industry metrics are presented for the period from 2009 onwards, indexed to their respective values in 2013. Subject to user feedback, we plan to extend this time series and to publish the relative levels of labour productivity in these more detailed industries in a future release.

The additional detail included in these metrics can support a wide variety of analytical work, of which only a small fraction is presented here. Labour productivity data were previously only available for 11 sections in services, whereas 46 estimates are now available – primarily at the division level1. The number of manufacturing series has increased more modestly from 10 to 13 – reflecting the more detailed data already available for this industry. For the first time, estimates of labour productivity for mining and quarrying, electricity, gas, steam and air conditioning supply, and sewage, waste management and remediation activities are also available, along with a breakdown of construction into three smaller components.

One important feature that stands out from this new dataset is the marked variation of productivity growth experiences within industry sections (that is, higher-level industry categories). To demonstrate this feature, Figure 1 shows the level of output per hour for section G (retail, wholesale, and motor trade) along with its three division level components, indexed to their respective values in 2013. While the lower, division level data can be more volatile, trends over the longer-term reveal the different experiences of G’s component industries. Since 2013, industry 45 (sale and repair of motor vehicles and motorcycles) grew faster than the other two components of G, but due to its relatively small weighting this has a relatively small effect on G as a whole. This stronger productivity growth was driven primarily by high gross value added (GVA) growth, as trends in hours worked were relatively similar across the three divisions.

These differences within industry sections are replicated across the economy to varying extents. Figure 2 compares the average annual growth in output per hour for each services section between Quarter 1 (Jan to Mar) 2009 and Quarter 1 2017 (shown in the bars) with the growth rates of its component sub-industries (the dots). It shows that analysing trends at the division-level can yield quite different results compared with analysis of section-level data. For example, sections H (transportation and storage) and I (accommodation and food services) have both broadly maintained their levels of productivity over this period. However, in transportation and storage, the productivity growth of postal and courier services, land transport, and air transport was offset by falls in productivity in water transport and warehousing – which experienced the weakest productivity growth within services over the period. In accommodation and food services, by contrast, the experience of the two sub-industries was much more similar over this period. Looking at services as a whole, it is rare that all divisions within a section have productivity growth in the same direction – demonstrating the extent to which variation at the division level within each section is a widespread phenomenon. 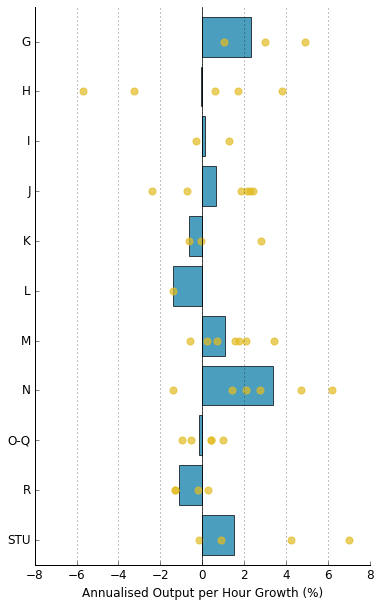 The new data also enable analysis of how different detailed industries achieve their labour productivity growth over a period, highlighting differences within and between industry sections2. Figure 3 shows the average annual growth of hours worked (horizontal axis) and GVA (vertical axis) for selected section-level industries (solid points) and their divisional-level industry components (hollow points). The diagonal line indicates combinations of hours and GVA growth that deliver no change in productivity: points above (below) the black line indicate positive (negative) average annual productivity growth. The variation in how different rates of productivity growth were achieved is striking. Average annual productivity growth in C (manufacturing) and M (professional, scientific and technical activities) over the 2009 to 2016 period was quite similar, at 1.3% and 1.1% respectively. In manufacturing, this was a result of largely stable total hours worked and modest growth in GVA. In industry M, by contrast, a similar rate of productivity growth was achieved by both stronger output and hours growth. 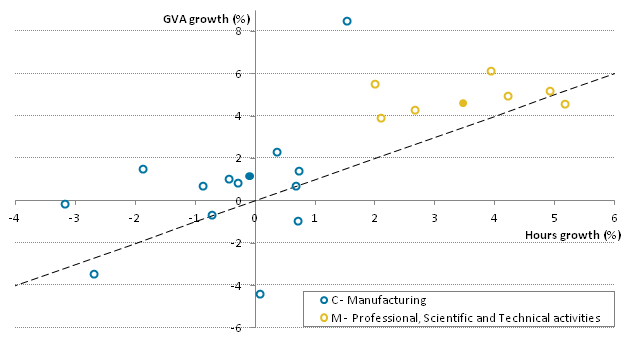 As with all of our productivity outputs, we welcome user views on the possible uses and usefulness of these data. This is particularly relevant for these experimental series. These should be directed to our inbox: Productivity@ons.gov.uk. Subject to user feedback, it is our intention to publish these more detailed industry labour productivity metrics on a quarterly basis in the future.

5 July 2017: UK productivity introduction: Jan to Mar 2017 draws together the headlines of the productivity releases into a single release, providing additional analysis of our productivity statistics.