Flash estimate of productivity for Quarter 2 (Apr to June) 2017 based on preliminary gross domestic product (GDP) and labour market data.

Output per hour – the Office for National Statistics’ (ONS) main measure of labour productivity – fell by 0.1% in Quarter 2 (April to June) 2017. This compares with a fall of 0.5% in Quarter 1 (January to March) 2017, as presented in Figure 1. As a result, labour productivity remains at around the same level as its pre-downturn peak.

The fall in productivity in Quarter 2 was the result of slower gross value added (GVA) growth (using the preliminary gross domestic product (GDP) estimate) relative to the increase in total hours worked, which was driven predominantly by growth in employment (using the latest Labour Force Survey data).

This flash estimate of UK productivity uses the first available information on output and labour input for the quarter. These data may be revised in subsequent months. As such, ONS releases the more detailed Productivity Bulletin after the third estimate of GDP for the quarter is published, which will be consistent with the quarterly national accounts.

Figure 1: Percentage change on previous quarter and index of output per hour 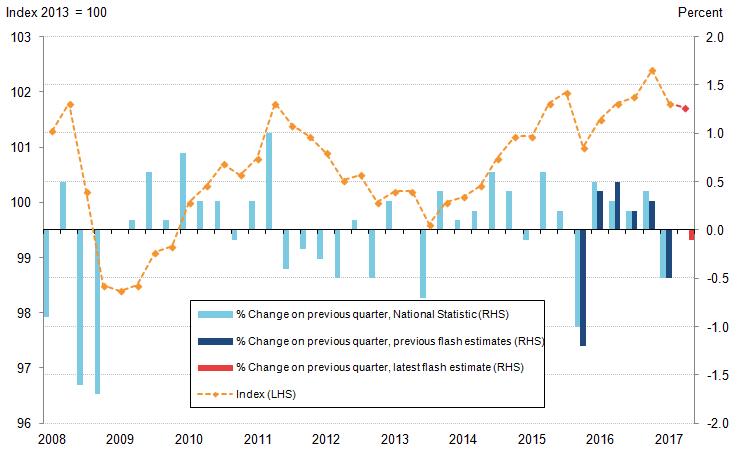 Download this image Figure 1: Percentage change on previous quarter and index of output per hour

This is the second quarterly fall in output per hour this year, following four quarters of positive growth in 2016. However, UK productivity growth has been relatively weak over a longer period – in particular since the onset of the economic downturn in Quarter 1 2008 – as a result of the relative strength of the labour market as compared with GDP.

Both employment – which captures the total number of people in work – and total hours – which captures both changes in employment and working patterns – fell in the course of the economic downturn, but total hours fell further reflecting falls in the average hours of those in employment. However, as GDP fell by a larger proportion in the economic downturn than either hours or employment and has grown slowly by historical standards during the recovery, productivity growth has been subdued since the downturn and has recovered more slowly than following previous downturns.

The main drivers of GVA growth in Quarter 2 2017 were the services industries, which grew by 0.5%, compared with growth of 0.1% in Quarter 1 (Jan to Mar) 2017. Growth was broad-based in the latest quarter with all four main sectors experiencing growth. Within production, manufacturing output fell by 0.5% in Quarter 2 2017, due mainly to a large fall in the manufacture of motor vehicles. In addition, the output of mining and quarrying decreased by 0.9% and water supply, sewerage, waste management and remediation activities decreased by 0.4%. However, these negative growth rates were partially offset by a 0.3% increase in the output of the electricity, gas, steam and air conditioning supply industries.

August’s UK Labour Market release shows that there were 32.1 million people aged 16 and over in work in Quarter 2 2017, which was 125,000 more than the previous quarter and 338,000 more than a year earlier. The fall in output per hour was caused by total weekly hours worked increasing by 0.4% on the quarter, reflecting the increase of 0.4% in employment with average weekly hours worked remaining roughly the same.