On 15 February 2022 we revised the Pret A Manger data to correct an issue that affected the results for the week ending 3 February 2022.

The issue was caused by a processing error which resulted in some data being incorrectly placed. No other time periods in the Pret A Manger data were affected by this, and the data will be revised in the latest release.

Results presented in this bulletin are experimental and may be subject to revision.

National retail footfall figures are supplied by Springboard, a provider of data on customer activity. They measure the following for overall UK retail footfall, as well as by high street, retail park and shopping centre categories:

Springboard's weekly data are defined over a seven-day period running from Sunday to Saturday. Week 5 of 2022 therefore refers to the period Sunday 30 January to Saturday 5 February 2022.

Users should note that all quoted figures have been rounded to the nearest integer. 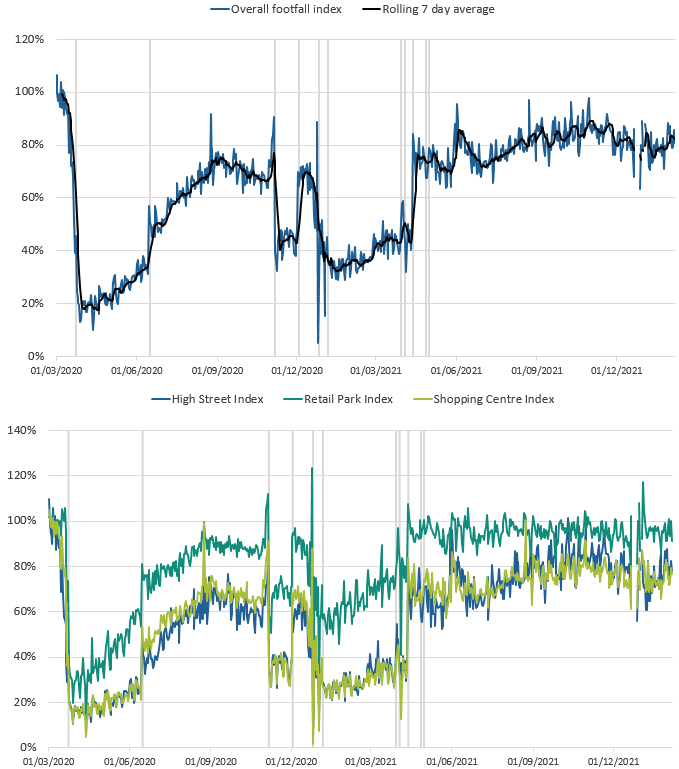 Download this image Figure 1: In the week to 5 February 2022, overall retail footfall in the UK increased by 3% and was 83% of the level seen in the equivalent week of 2019

According to Springboard, in the UK in the week to 5 February 2022, the volume of overall retail footfall:

Figure 2: In the week to 5 February 2022, South West England had the highest levels of retail footfall compared with the equivalent week of 2019, at 90%

Volume of daily retail footfall, percentage of the level recorded on the same day of the equivalent week of 2019, seven-day rolling average, UK countries and English regions, 1 March 2020 to 5 February 2022

Download this image Figure 2: In the week to 5 February 2022, South West England had the highest levels of retail footfall compared with the equivalent week of 2019, at 90%

In the week to 5 February 2022, there were increases in retail footfall in 8 out of the 10 English regions and UK countries. The largest weekly increase was in Greater London, which rose by 5% when compared with the previous week. This was in part driven by a 7% week-on-week increase in high street footfall.

Companies are allocated to one of four categories based on their primary business:

Figure 3: The aggregate CHAPS-based indicator of credit and debit card purchases increased by 6 percentage points in the week to 3 February 2022 to 96% of its February 2020 average

Download this chart Figure 3: The aggregate CHAPS-based indicator of credit and debit card purchases increased by 6 percentage points in the week to 3 February 2022 to 96% of its February 2020 average

Figure 3 shows changes in the value of CHAPS payments received by large UK corporates from their credit and debit card processors, "merchant acquirers".

In the week to 3 February 2022, the CHAPS-based indicator of credit and debit card purchases increased by 6 percentage points from the previous week, to 96% of its February 2020 average level. This increase follows the further relaxation of restrictions throughout the UK, at the end of January and the cyclical rise in spending around the end of the month.

The spending categories recorded the following increases in the latest week:

In January 2022, the monthly CHAPS-based indicator of aggregate credit and debit card spending was at 87% of its February 2020 average level, 27 percentage points lower than in December 2021. This fall is consistent with a reduction in spending following the Christmas period.

The monthly data time series is available in the accompanying dataset and includes methodological notes that users should bear in mind. The monthly CHAPS index is calculated by the Office for National Statistics (ONS), rather than being an additional series that is produced and validated by the Bank of England.

Shelf availability research for shops across the UK has been undertaken by Kantar Public. Collectors gathered information on a range of items from up to three different stores across multiple locations. They recorded availability across four categories: “none”, “low”, “medium” or “high”.

It is important to note these categories are subjective as they are recorded by individual collectors. The data were collected between 4 and 7 February 2022. This series is updated fortnightly.

Figure 4: Shelf availability of items was lowest for “paracetamol” and “ibuprofen” in the latest period, with 19% and 16% of these items’ availability marked as either “none or low”, respectively

Item availability in stores across 132 locations covering UK countries and English regions, between 4 and 7 February 2022

Download this chart Figure 4: Shelf availability of items was lowest for “paracetamol” and “ibuprofen” in the latest period, with 19% and 16% of these items’ availability marked as either “none or low”, respectively

Data for all categories are available in the accompanying dataset.

Pret A Manger is a sandwich and coffee shop franchise chain, operating around 400 stores across the UK. Its transactional data are presented as an index and show total weekly till transactions at Pret A Manger shops as a proportion of the average weekly level in the first four weeks of 2020 (between Friday 3 January and Thursday 30 January 2020). Because of this comparison across the data time series, users should expect an element of seasonality in the data.

More information on the areas featured is available in the Economic activity and social change in the UK, real-time indicators methodology. These data are also made available every Tuesday via Bloomberg.

Figure 5: In the week to 3 February 2022, transactions were highest compared with their January 2020 average in Yorkshire and London suburban stores at 126%

Download this chart Figure 5: In the week to 3 February 2022, transactions were highest compared with their January 2020 average in Yorkshire and London suburban stores at 126%

Figure 6: Transactions at stores in regional stations and London airports increased by 6 percentage points in the latest week to 76% and 64% of their January 2020 average, respectively

Download this chart Figure 6: Transactions at stores in regional stations and London airports increased by 6 percentage points in the latest week to 76% and 64% of their January 2020 average, respectively

These figures are experimental estimates of online job adverts provided by Adzuna, an online job search engine, by category and by UK country and English region. The number of job adverts over time is an indicator of the demand for labour. The Adzuna categories used do not correspond to Standard Industrial Classification (SIC) categories, so these values are not directly comparable with the Office for National Statistics' (ONS) Vacancy Survey.

Of the 28 categories, 23 saw an increase in the number of online job adverts, while three decreased and two remained unchanged when compared with the previous week. The largest weekly increases were in "travel and tourism" and "wholesale and retail", which rose by 10% and 9%, respectively. Meanwhile, the largest weekly decrease was in "creative, design, arts and media", which fell by 2%.

The category with the highest level of online job adverts when compared with its February 2020 pre-coronavirus average level continues to be "transport, logistics and warehouse" at 264%.

Figure 8: The volume of online job adverts increased in all 12 UK countries and English regions when compared with the previous week

The volume of online job adverts increased for all 12 English regions and UK countries on 4 February 2022 when compared with the previous week. The largest weekly increase was in Northern Ireland, which rose by 12%. However, it should be noted that this series displays a high volatility caused by a lower number of adverts in comparison with other regions.

Figure 9: The seven-day average estimate of UK seated diners increased by 6 percentage points in the week to 7 February 2022 to 112% of the level in the equivalent week of 2020

Download this chart Figure 9: The seven-day average estimate of UK seated diners increased by 6 percentage points in the week to 7 February 2022 to 112% of the level in the equivalent week of 2020

In the construction industry the number of new reporters in January 2022 increased by 17% compared with December 2021, and was 16% higher than in January 2021.

The heatmap in Figure 11 is a visual way of showing the VAT diffusion indices based on the standard deviation from their historical 2008 to 2019 average. Larger deviations are more darkly coloured, with red representing a negative change, while teal represents a positive change when compared with the previous period.

Figure 11: A net 6% of all industry firms reported decreased turnover in December 2021 compared with November 2021, which was the largest change since April 2020 when there was a net 16% decrease

UK business turnover estimates, diffusion index standard deviation from the mean, up to December 2021, and new reporters, UK, up to January 2022

In the production industry, a net 5% of firms reported decreasing turnover in December 2021 compared with the previous month. The equivalent figure for the construction and agriculture industries was a net decrease of 4% and 3%, respectively, and were the largest net decreases for both since July 2021.

Daily UK flights
Dataset | Released 10 February 2022
Experimental daily UK flight numbers and rolling seven-day average, including flights to, from, and within the UK.

Users should note that this section lists a selection of the data available with this publication. For the full list of available datasets please see the accompanying dataset page.

Incorporations are when a company is added to the Companies House register of limited companies. This can also include where an existing business applies to become a limited company, where it was not one before.

A voluntary dissolution application is when a company applies to begin dissolution proceedings. As such, they effectively choose to be removed from the Companies House register. For a company to be eligible to voluntarily dissolve, it should not have completed any trading activity for a period of three months.

When a company fails to file the required financial accounts and/or confirmation statements, if no contact is received by Companies House following a series of letters to the company and its officers, a first gazette notice is published in the Gazette, a notice of the Registrar's intention to dissolve the company.

A new reporter is defined as a firm with a Value Added Tax (VAT) reference (that is, firm identification number), which has not previously reported its VAT returns. New reporters are published within one month of the end of the reporting period. The new reporting behaviour measure is classified by the month the data were received by HM Revenue and Customs (HMRC), known as the receipt date; this is not necessarily the same as the reference period (the period for which the VAT return is made).

A full overview of coronavirus (COVID-19) restrictions for each of the four UK constituent countries can be found here:

These restrictions should be considered when interpreting the data featured throughout this bulletin.

Information on the strengths and limitations of the indicators in this bulletin is available in the Economic activity and social change in the UK, real-time indicators methodology.

The methodology for the advanced notifications of potential redundancies dataset can be found in the in the 3 February 2022 Economic activity and social change in the UK, real-time indicators publication. In the coming weeks there will be a full methodology paper published, which will be linked in this bulletin.

Coronavirus (COVID-19) latest data and analysis
Webpage | Updated as and when data become available
Latest data on the coronavirus in the UK and its effect on the economy and society.

Coronavirus and the social impacts on Great Britain
Bulletin | Released 4 February 2022
Latest indicators from the Opinions and Lifestyle Survey.