Larger shops in England and Wales could be opening their doors for longer on Sundays if an expected House of Commons vote goes ahead.

MPs are due to vote later today (March 9) to devolve the power to extend Sunday trading hours to councils, as an amendment to the Enterprise Bill.

If the amendment is approved, local authorities will have the power to establish zones where opening times could be extended, which the Government hopes will drive competition, productivity and local economic growth, as well as helping towns and cities compete for international tourism.

The Sunday Trading Act first came into force in July 1994, allowing large shops to open for six consecutive hours, between 10am and 6pm.

Who works on a Sunday?

The Labour Force Survey shows that in 1994, of those who usually work on Sunday, 6.8% were in sales occupations (which include retail sales, as well as occupations like customer services and call centres). 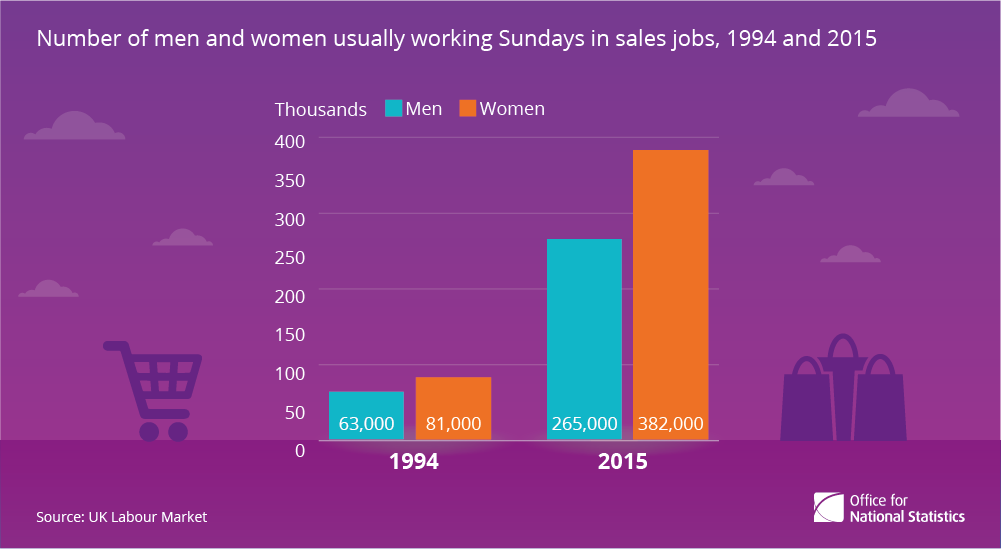 As well as those in sales occupations, many other professional groups have been increasingly working on Sundays.

Between 1994 and 2015, the three other occupational groups that have seen an increase in their share of employment among those people who usually work on Sunday are professional occupations, skilled trades occupations and elementary/other occupations.

Business secretary, Sajid Javid, who is sponsoring the bill,  explained one reason for shaking up the 20-year-old laws on Sunday trading was because it meant larger retailers could not compete with the change in shopping habits to online purchasing.

The first liberalisation of Sunday trading hours in the mid 1990s coincided with the birth of online shopping websites such as Amazon and ebay, now global conglomerates which have no opening hours.

Under current rules, which came into force in 1994, larger stores are restricted to a maximum Sunday opening of six consecutive hours, between 10am and 6pm. Smaller shops can open whenever they want.

Since the Sunday Trading Act came into force in July 1994, there has been a gradual increase in the proportion of retail trade overall.5

When looking at sales data from the subsequent months of July, we see a small and steady annual growth.

Although this data does not confirm that Sunday trading has been responsible for the increase in sales.

The original data source can be found on the ONS website.