Childbearing for women born in different years, England and Wales: 2015

The changing composition of families over time, comparing the fertility of women of the same age and the number of children they have had.

The average completed family size for women born in 1970, and reaching age 45 in 2015, was 1.91 children per woman. This compares with their mothers’ generation, represented by women born in 1943, who had on average 2.24 children.

A woman’s childbearing is assumed to start at age 15 and end at the age of 45 (the day before her 46th birthday). The estimates have been updated with 2015 births, which means that completed family size for women born in 1970 (women reaching age 45 in 2015) is presented for the first time. Women born in 1985, who reached age 30 in 2015, are also used as a comparison group, as age 30 may be considered the mid-point of a woman’s childbearing years.

The ages of women are presented in “exact years”. Therefore figures should be interpreted as the average number of children a woman has had up to that birthday. So childbearing up to exact age 30 includes cumulative fertility through her lifetime up to the day before her 30th birthday. Any childbearing in the 12 months from her 29th birthday onwards will be included in fertility up to exact age 30.

Table 1: Average family size and estimated family size distribution for women who have completed their childbearing, by year of birth of women, selected cohorts

Download this table Table 1: Average family size and estimated family size distribution for women who have completed their childbearing, by year of birth of women, selected cohorts

Figure 1 shows the average number of live-born children (completed family size) for women who are assumed to have completed their childbearing. This is a cumulative measure derived from summing the fertility rates of female birth cohorts at each age from 15 to 45 and over. The 1970 cohort had on average 1.91 children, unchanged from the 1969 cohort and similar to recent previous cohorts. Average completed family size peaked at 2.42 children for women born in 1935, and has been falling since. Women belonging to the 1958 cohort were the first estimated to have an average completed family size of fewer than 2 children over their childbearing lifetime. This decrease in the average family size is mainly due to rising levels of childlessness. 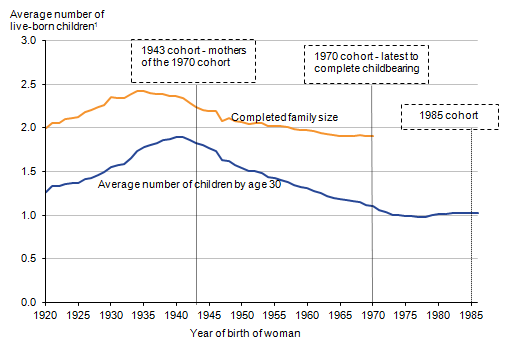 Download this image Figure 1: Average number of live-born children by age 30 and completed family size, by year of birth of woman, 1920 to 1986

Overall, women born in the 1960s and 1970s had fewer children by age 30 than previous generations. The 1970 cohort had 1.10 children on average by their 30th birthday, compared with 1.83 by the same age for their mother’s generation, the 1943 cohort. This reflects their postponement of childbearing to older ages, for reasons including:

This is mainly because women from all cohorts between 1979 and 1985 have had higher fertility rates in their late twenties than those born in 1978. Possible reasons for this increase include the changes in support for families introduced by previous governments (such as tax credits and maternity or paternity leave)2,3 and the increasing proportion of women aged 25 to 29 who were born outside the UK (with fertility above the UK-born average)4.

Around 1 in 6 women born in 1970 remained childless by the end of their childbearing years compared with 1 in 8 women born in 1943. The level of childlessness is relatively high for the women born in 1970 compared to their mother’s generation (1943), although comparable levels have been seen before during the 1920s. Although there has been a small drop in childlessness for the more recent cohorts completing their childbearing, overall, levels of childlessness have been higher for the cohorts born between the mid 1950s to 1970 than for earlier generations. This may be due to a decline in the proportion of women married, changes in the perceived costs and benefits of childrearing versus work and leisure activities, greater social acceptability of a childfree lifestyle and the postponement of decisions about whether to have children until it may be biologically too late (see section note 1).

Figure 2: Percentage of women remaining childless by their 30th birthday and completion of childbearing, by year of birth of woman, 1920 to 1986 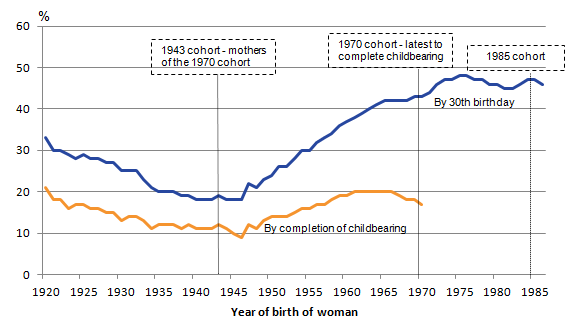 Download this image Figure 2: Percentage of women remaining childless by their 30th birthday and completion of childbearing, by year of birth of woman, 1920 to 1986

On their 30th birthday, 47% of the 1985 cohort were childless, a higher proportion than for the 1970 cohort at the same age (43%). This highlights the trend that women have been increasingly delaying having children to older ages.

Notes for By the end of their childbearing years 17% of women born in 1970 remained childless:

The proportion of women who have had a child by age 20 has been gradually decreasing for recent cohorts. From a peak of around 1 in 5 for women born in 1952, it has declined to 1 in 14 women for those born in 1995, the most recent cohort to reach age 20. This shows that the proportion of women becoming teenage mothers is falling, though the level of teenage motherhood remains the same as that of the cohorts born in the early 1920s when around 7% of women had a child by age 20. This fall in the proportion of teenagers becoming mothers has accompanied recent falls in the annual number of teenage conceptions.

Conception statistics include all pregnancies of women usually resident in England and Wales which lead to either a live birth, stillbirth or an abortion under the 1967 Act. The most recent figures on under-18 conception rates for England and Wales show that in 2014 the rate was 22.9 conceptions per thousand women aged 15 to 17, which is the lowest level since records began in 1969 (a decrease of almost 50% since then). Teenage conception and birth rates are used widely as outcome indicators in the sexual health context.

While the 2-child family remains the most common family type in England and Wales, with 37% of women born in 1970 having 2 children, the prevalence is below the peak of 44% for the 1950 cohort.

Figure 4: Estimated family size distribution for women born between 1920 and 1970 who are assumed to have completed their childbearing, 1920 to 1970

Download this chart Figure 4: Estimated family size distribution for women born between 1920 and 1970 who are assumed to have completed their childbearing, 1920 to 1970

The fertility rates of selected cohorts at particular age milestones highlight how the age distribution of women giving birth has changed over time. 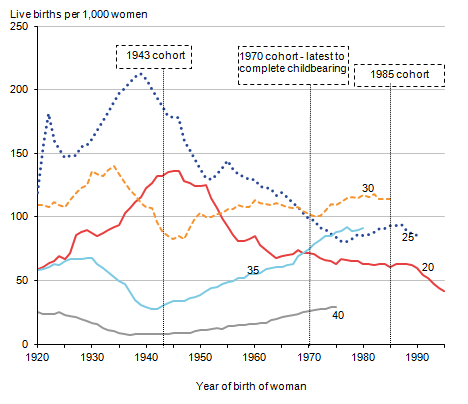 Download this image Figure 5: Age-specific fertility rates at selected ages, by year of birth of woman, 1920 to 1995

In comparison with the 1943 cohort, the 1970 cohort had much lower fertility at ages 20 and 25. At older ages, the 1970 generation had higher fertility rates, as shown at ages 35 and 40. However, this recuperation at older ages was not sufficient to catch up with the larger completed family size of the 1943 cohort who had 2.24 children per woman on average compared with 1.91 children per women on average for the 1970 cohort.

If recent trends in childbearing at older ages continue, the 1985 cohort would be expected to have an older average age at childbearing than the 1970 cohort.

Annual summary birth statistics for the UK and its constituent countries can be found in the Vital Statistics: Population and Health dataset tables.