“Food, drink and clothing prices all rose in March. However, this is offset by air fares, which fell slightly but last year rose substantially thanks to the timing of Easter.

“The costs of raw materials and the price of manufactured goods leaving factories were both little changed, as falling fuel prices helped stem further rises.

“While house prices and rental costs rose over the year, the rates of increase continued to slow markedly.”

We introduced our new economic "theme days" in January which will ensure that related economic statistics are released together. The separate bulletins relating to the Prices theme day contain details of the new data published and important information on how to interpret the statistics.

Data tables accompanying this release are: 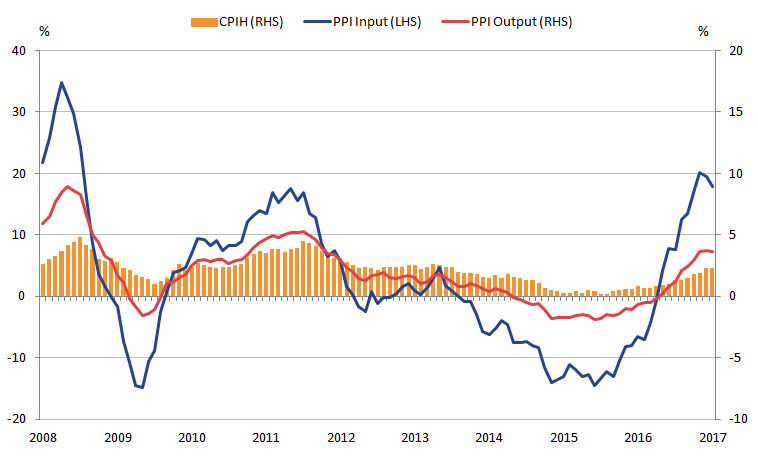 Figure 2: IMF global commodity price index for food in US dollars and sterling and input PPI series for imported food

Download this chart Figure 2: IMF global commodity price index for food in US dollars and sterling and input PPI series for imported food

The IMF commodity price index for food (in both currencies) tends to be more volatile than the imported food series within input PPI. For example, where there were short-term changes in global food prices (such as in 2010 to 2011), the imported food series remains stable for a few months, before increasing at a more moderate pace. This could be due to producers who have arranged contracts at a constant price to protect themselves from potential price increases, termed “hedging”.

Since the beginning of 2016, global food prices in sterling terms have increased sharply. This increase was much larger than in dollar terms because of the significant depreciation of sterling against the dollar over this period. While the PPI imported food series has also increased over this period, it has been at a slower rate than global food prices. Previous analysis showed that around half of the value of UK food import transactions is conducted in sterling. If a foreign exporter kept their prices constant in sterling terms, this would mean that prices would not increase as fast as if they were in dollar terms and converted to sterling. This could also be further evidence of producers arranging contracts to “hedge” against potential exchange rate effects.

Figure 3 shows the 12-month inflation rates for food within the Harmonised Indices of Consumer Prices (HICP) for the European Union (EU), Germany, France and the UK. The HICP are calculated using a common methodology to provide the best measure for comparisons of consumer price inflation across the EU. In the UK, the HICP is equivalent to the Consumer Prices Index (CPI).

Following the spike in global food prices in 2008 (Figure 2), food inflation in the UK peaked at 14.5% in August 2008 and remained above 10% until mid-2009. Other countries saw a similar trend, although food inflation decreased at a quicker rate in Europe resulting in a period of deflation at the end of 2009.

For the past 2 years, the price changes for food in the UK remained well below the other countries. This could be partly due to the supermarket price wars in the UK over this period which resulted in a downward pressure on food prices. However, all countries are now seeing an increase in food prices as a result of the upward trend in global food prices (Figure 2). In the 12 months to February 2017, the food component of the HICP grew by 0.3% in the UK, a return to food price inflation for the first time in nearly 3 years.

As discussed in a previous prices economic commentary, while the prices of some individual vegetables increased in the month in the UK, vegetable prices as a whole still fell in the 12 months to February 2017. However, when comparing this to other countries there are large differences in the price changes of vegetables. In the 12 months to February 2017, vegetable prices in the EU 28 countries increased by 12.4% and in Germany they increased by 22.5%.

Figure 4 shows the contributions to the core Consumer Prices Index including owner occupiers’ housing costs (CPIH) 12-month rate from division-level components in the Classification of Individual Consumption by Purpose (COICOP) structure. Core CPIH excludes the volatile components from the series, notably food, alcoholic beverages, tobacco, and energy . Taking out these components means that core CPIH annual growth is more stable than the aggregate CPIH. Figure 4 shows that housing consistently provides the largest contribution to the core CPIH 12-month growth rate, contributing an average of 0.6 percentage points over the period.

The increased contribution from recreation and culture has been largely driven by technological products, particularly information processing equipment. This period coincides with reports that foreign producers of technological products have raised prices of their products sold in sterling (following the depreciation of sterling in 2016) to re-align with the prices of these products sold in US dollars.

Notes for: Core inflation has gradually increased since the end of 2015

Figure 5: Average deposit as a percentage of average dwelling price

Download this chart Figure 5: Average deposit as a percentage of average dwelling price

The increase in the deposit ratio for first-time buyers was largely driven by a change in mortgage lenders’ requirements for deposits, which reflected the fall in confidence in the economy after the downturn. Deposits for first-time buyers increased from an average of £32,000 at the beginning of 2008 to £61,000 in Quarter 1 2010. The increase in the deposit ratio was further exacerbated by the fall in house prices over the same period. 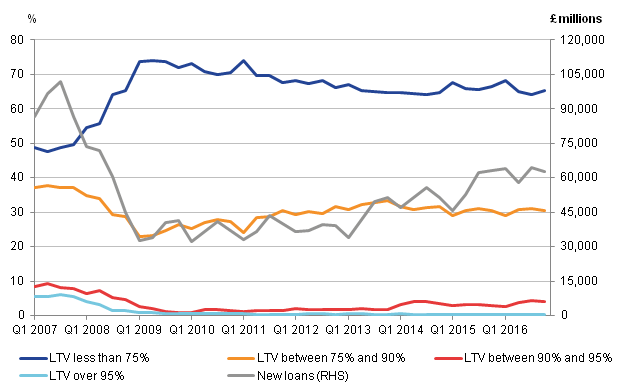 However, Figure 5 shows that since 2010 the deposit ratio for both first-time buyers and former owner occupiers has been decreasing steadily. By Quarter 4 2016, the deposit ratio has returned to around the same level seen in mid-2008. In particular, first-time buyers have seen a decrease in the average deposit paid, from £61,000 in Quarter 1 2010 to £50,000 by the end of 2016.

The decline in deposit ratios for first-time buyers may be explained by returning confidence in the housing market since 2010. Figure 6 shows that the percentage of new residential loans with a LTV ratio less than 75% decreased from 73.1% in Quarter 1 2010 to 65.2% at the end of 2016. At the same time, residential loans taken out with an LTV ratio between 90% and 95% increased from 1.0% to 4.0%, suggesting that banks are more willing to take on risk in their balance sheets again. However, there is still a decline in the most risky lending, with the over 95% LTV mortgages seeing a further decline in approvals from 0.6% to 0.3%.